If you are looking for a holiday that is a little different why not try Mt Wood? Located in the Sturt Stoney Desert, Mt Wood Station was one of the iconic sheep and cattle stations that prospered, as Australia did, "on the sheeps back."
Located in far western NSW and just east of Tibooburra, It is an experience that will both shock and delight. Now a national park, the park expands across incredible desert country right up to the QLD border and SA border. 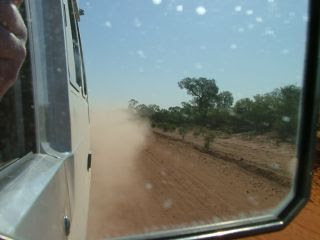 
The Manager of this region Dr Ingrid Wittes work in the park is worthy of note. Simply this- she runs the park, its staff, large machinery and infrastructure. All on a shoe string budget and yet still has time to have international students, run valuable scientific studies, and keep the homestead looking fantastic 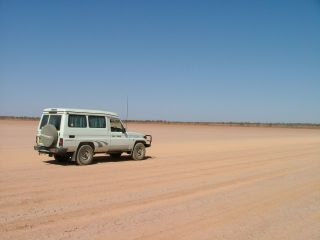 Troopie on a salt lake

You will learn a lot. Its that simple. There are a number of ways to get there, light plane, bus or four wheel drive. The routes are simple:- Broken Hill north along the Silver City Highway,which is a mixture of tar and dirt. Or west from Bourke along the Highway which is simply sand and rock. 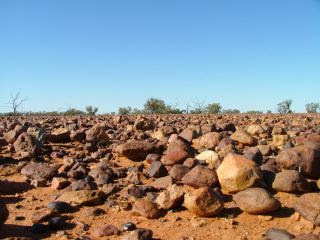 A word of advice, if it rains stay put. The roads turn to glue with just a light drizzle, and you will find yourself stranded. Wait 24 hours and they dry out again...

Also if you plan a trip in a four wheel drive carry 2 spare wheels, enough water to last for the number of people (e.g. 10 litre per day per person). It is not uncommon not to see anyone for a couple of days. Mobile phones do not work at all, not even in the town of Tibooburra, so a good UHF and/or a satellite phone is recommended. Basic precautions are whats needed and you will enjoy such a place. It is interesting to note that the highest form or death or injury in the outback is due to a lack of 2 spares and water. 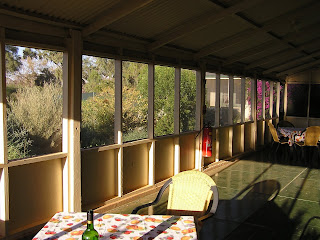 One of the nicest things about Mt Wood is the gardens that Ingrid has put in. They make a stunning backdrop against the harsh realities of the surrounding area. 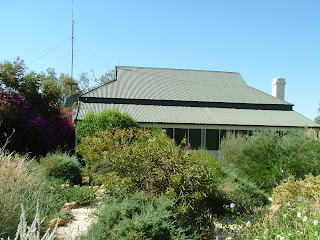 Also surprising is the stations rubbish dump. I know what you are thinking, but if you have any understanding of motor vehicles you can see a direct link to the prosperity of the place and just how/when it went broke. 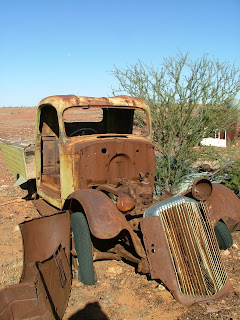 Most of the vehicles date 1930-1960. Simply put; the rubbish dump is 5 acres of carts, cars, beer bottles, broken toys, windmills, and fencing. I could not help but to think about the previous owners, their life, their prosperity and decline. 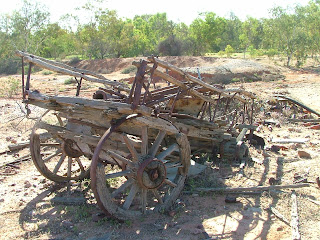 I wandered the shearing shed, the shearing quarters and farm tank. By the way, don't think of a tank as a steel or concrete drum. A tank on an Australian station is a HUGE hole in the ground in which artesian bore water is pumped. It irrigates paddocks, waters stock and provides water for the house hold. Wildlife has become depoendant on many of these. It was not until the 70's and 80's that the "unlimited supply" was found to be "limited". Ingrid indicated that the great Artesian Basin had dropped 15metres and the surrounding district had lost 6 feet of top soil- An environmental disaster. 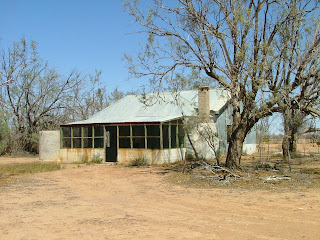 
Wildlife abounds with birds, reptiles and mammals using the tanks as their watering supplies. As the drought bites even harder water bird numbers have dropped by 90% since 2000. 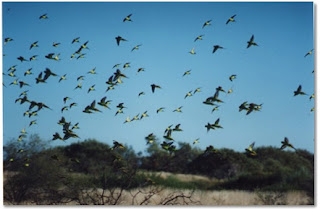 Flocks of budgies can still be seen, as too the odd emu. 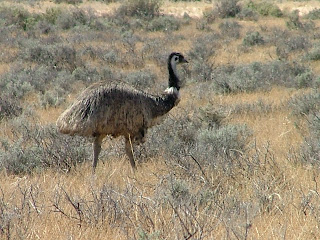 Accommodation in the homestead is comfortable and inviting. A wonderful kitchen, lounge, hot showers and plush beds make staying here really something worthwhile. 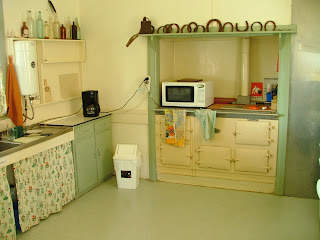 There is also wonderful camping in various place throughout the park. The colours of the area, the stars and night and its vast space create an almost luna environment.

So if you would like an outback adventure, but can only get to NSW try our far western region national parks. 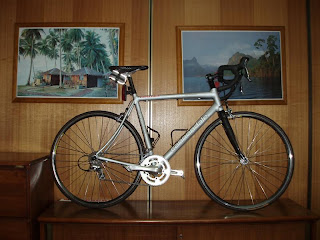 Today I decided to ride to work, about 80km all up. Nothing exciting about the ride at all, just pleasant until the last 10km which was in heavy peak hour traffic.

Unlike Europe, most Aussie drivers do not care much for push bike riders, so it is important to be on your guard, prepare to take evasive action, and keep your energy levels up so you can sprint away from traffic lights etc.

Fortunately 70km of the ride is on bike track which is becoming better as time goes by!

I hope to be able to do this once or twice a week... leave the car at home and save on carbon emissions
Posted by simon at 3:57 PM 19 comments: 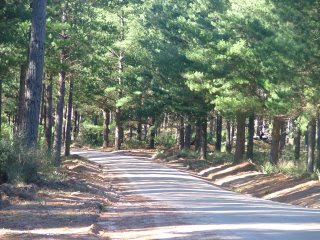 The Newnes walk is an interesting one. It is located about 30klm from the Bells Line of Road, near the mining town of Lithgow and the Zig Zag railway. It's a simple 15klm walk that takes you along the historical Coach Track, then along the old railway line, returning via the Pagoda track, to the camp site. 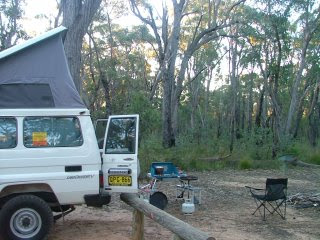 Newnes was an old shale oil town set in the beautiful Wolgan Valley. The engineering for the railway and roads is simply amazing.
Today, all that remain of the tracks are some railway tunnels, viaducts, old water storage dams and retaining walls. Of the town itself? Well the old hotel, the railway platform and a few bricks and coking ovens are all that's left. However, if you look hard enough you will find evidence of town life. The town was all but abondoned during the depression, much was dismantled to help with the war effort. 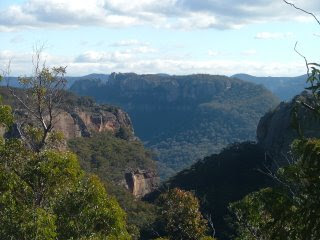 The scenery is specatular. Two National Parks meet here, the Wollemi National Park and the Gardens of Stones National Park. Pagodas,canyons and valley scenes simply take your breath away. If you look closly you can see the engineering of via ducts, cuttings, stone walls, piping etc. The bush slowly reclaiming it all. 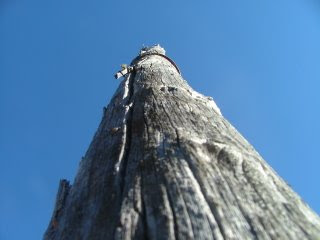 It is hard to imagine, as you walk, that, less than 100 years ago, this area was a mining town. But the evidence of destruction can be seen here-

Its hard to imagine that it went from this to this:-

Pagoda formations to the west and an old telegraph pole provide a unique contrast. 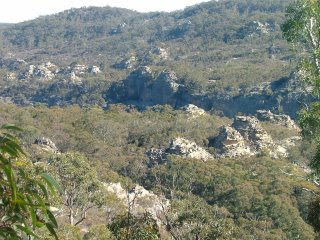 The track decends into the valley. Some sections are vey steep. I could not help but feel sorry for the horses having to pull coaches up such a road. Apparently people travelling to and from the town would disembark the train before the tunnel and walk the Pagoda track to catch the coach. When I peer over the edge, it appears that the train would have travelled very close to the cliff edge.. not for the feint hearted!

After walking a few klm the track now enters rain forest gully. Beautiful Bell Miners can be heard as too a variety of other birds. The track soon joins the junction of the railway. 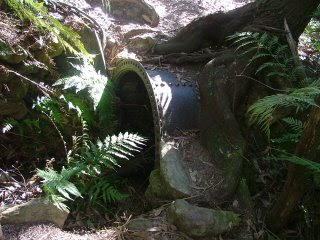 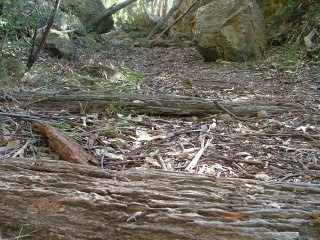 After five klms I approach the glow worm tunnel. The engineering of the rail track was amazing. The engines themselves had to "bend" to make it around the cliffs and through the tunnels. Special bogies and wheels were made to allow this (I am sure a rail engineer could explain it better). Shale oil was used to make kerosine, candles and the early fuels for motor vehicles. By WW1 traditional oil was more popular and the whole project was doomed.

But what of the birds? Needless to say the bush was full of the beautiful songs of Regent Honey Eaters, New Holland Honey Eaters and Eastern Spine bills.

I continued to walk through the tunnel and was greeted by a wonderful display of glow worms. I returned to the Landcruiser via the Pagoda track by 4pm. 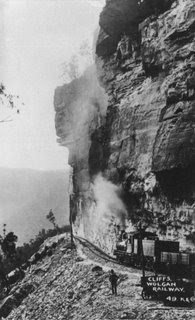 However, as evening fell, so too did the temperature. I have walked in the Snowy Mountains, camped in the middle of winter in some cold places. I admit I have NEVER felt the cold as I did this night. My food went cold as I cooked it and the frost fell as early as 5pm. Not even two layers of clothing, a huge log fire, coffee and two sleeping bags could keep me from being frozen. Still, the thought of sitting back at home did not appeal at all. The next morning the troopie and the ground was covered in frost. All the puddles were frozen and a white layer was everywhere even the water in the billy was frozen and about 1 cm thick! I quickly made breakfast and set off for more birding, following the Galah Mountain track. 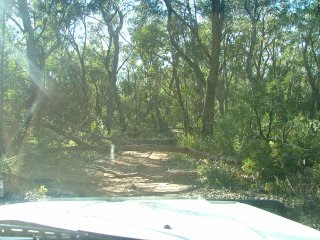 A careful drive, avoiding fallen trees, found Buff Rumped Thornbill, Eastern Yellow Robin, and perhaps the most exciting (for a budding bird watcher like me) a Spotted Quail Thrush.. A family of Superb Wrens also flitted & chatted amongst the grasses.... then along the galah track.... A Galah AND Yellow Tailed Cockatoo....

I chose to return home having spent a wonderful overnight experience. I passed the Zig Zag railway, and thought of the pioneers and their ghost town.... 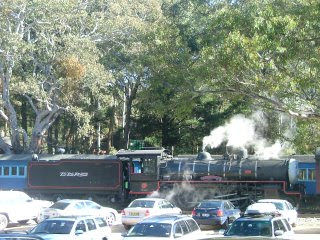 Mallie:- Spotte quail thrush simply ran out in front of me... but paused long enough for me to get a good look and look at the book.


NOTE:- I met a couple of older guys who were canyoning in the area ( in there late 60's)

They have been reported missing and a search is underway in the area I was in. Onc again the Blue Mountains can be dangerous and MUST be treated with respect.
July 16, 2007 3:56 PM
Kiwi Nomad 2006 said...
Sounds flippin cold!!!!! I had long johns on and my sleeping bag fully zipped inside the swag in central Oz and it got nowhere near that cold!
Wonderful account. My mother came from goldmining forebears, and I have loved wandering around near her 'village', seeing remnants of the huge sluicing operations that went on there.
July 17, 2007 2:13 AM
TCA said...
Sounds like an adventure.. take yourself a decent thermal base layer and a woolie hat next time!

Don't you Aussies have any thermal undies?

I have lost my blog! Last night with 2 windows open, I deleted what I thought was a post, but was my blog! I have NO idea how to recover any of it!
Posted by simon at 2:46 PM 21 comments:

Newer Posts Home
Subscribe to: Posts (Atom)
Follow @SimonCotter62
" So remember to look up at the stars and not down at your feet. Be curious and however difficult life may seem, there is always something you can do and succeed at. It matters that you don't give up" Prof. Hawkins 2012