Well, I am  off- into the channel country of outback Queensland in persuit of family  history, birds and the smell of open spaces. I  look forward to returning to the city  of Sydney (not).

Clancy  of the Overflow.

I had written him a letter which, I had, for want of better
Knowledge, sent to where I met him down the Lachlan, years ago,
He was shearing when I knew him, so I sent the letter to him,
Just `on spec', addressed as follows, `Clancy, of The Overflow'.
And an answer came directed, in a writing unexpected,
(And I think the same was written with a thumb-nail dipped in tar)
'Twas his shearing mate who wrote it, and verbatim I will quote it:
`Clancy's gone to Queensland droving, and we don't know where he are.'

In my wild erratic fancy visions come to me of Clancy
Gone a-droving `down the Cooper' where the Western drovers go;
As the stock are slowly stringing, Clancy rides behind them singing,
For the drover's life has pleasures that the townsfolk never know.
And the bush hath friends to meet him, and their kindly voices greet him
In the murmur of the breezes and the river on its bars,
And he sees the vision splendid of the sunlit plains extended,
And at night the wond'rous glory of the everlasting stars.

I am sitting in my dingy little office, where a stingy
Ray of sunlight struggles feebly down between the houses tall,
And the foetid air and gritty of the dusty, dirty city
Through the open window floating, spreads its foulness over all
And in place of lowing cattle, I can hear the fiendish rattle
Of the tramways and the 'buses making hurry down the street,
And the language uninviting of the gutter children fighting,
Comes fitfully and faintly through the ceaseless tramp of feet.

And the hurrying people daunt me, and their pallid faces haunt me
As they shoulder one another in their rush and nervous haste,
With their eager eyes and greedy, and their stunted forms and weedy,
For townsfolk have no time to grow, they have no time to waste.
And I somehow rather fancy that I'd like to change with Clancy,
Like to take a turn at droving where the seasons come and go,
While he faced the round eternal of the cash-book and the journal --
But I doubt he'd suit the office, Clancy, of `The Overflow'.

See you  all soon! 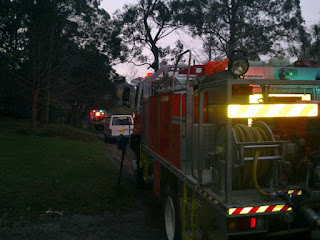 Tankers arriving in the street.

Being quite busy in recent weeks I was not to sure what to post. So here are some more photos of the bush fire event. It was all terribly serious and demonstrates just how quickly fire spreads. Here are photos of the tankers in the street, the trailer loaded and ready to evacuate as well as Dave in his fire brigade uniform. 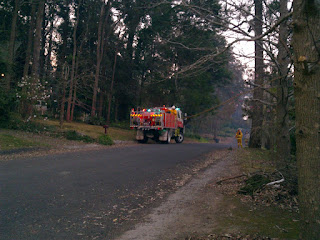 Over recent days I have walked into the area where the fire hit. Its really quite daunting to see just how much heat it generates, and how quickly the fire moves. It behaves not unlike Ocean currents, where there are bigger "waves", "rips" and "tides". Its all just so dangerous. After a few weeks the smell of fire and heat still exist and the helicopters still patrol. We have had a couple of flair ups but nothing out of control. 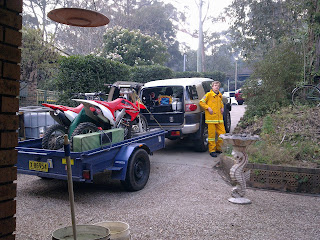 Packed and ready to roll.

The bike riding continues and I have done a couple of rides in the National Park on the mountain bike. The ankle is holding up well but i am very unfit-failing to climb the hills I used to do in one hit. However, the weight is coming off and each ride gets better. I was dissapointed to see that Cannondale now manufacture in China- no longer are their bikes "Hand made in the USA". Sad but a sgn of the times. 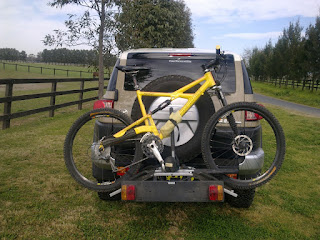 The Cannondale packed for its first mountain bike outing.

The recent ride I did was again at Mount Banks. Easy grade with a couple of steep pinches thrown in its a good test of the bike and me. The fire trail has a lot of larger loose rocks and sand so maintaining good balance is the key. Lunch was at my favorite cliff face which looks down into Blue Gum Forest and the Grose River. I often look into this area and recall all the fantastic walks I have done since the mid 1970's! Gosh I am getting old. 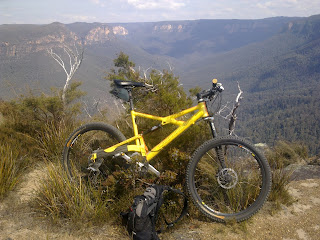 The Prophet at my favorite spot

I think riding the bike at 51 is not the same as riding as a 30 year old! So I dont expect to break records now, prefering consistancy and overall health as the goals. We shall see.