With numerous recent events, (such as dislocating my shoulder), and a new dog, (a Blue Healer), as well as the Mac now almost jammed solid, I am having a blogging break for a short time. There are a lot of things to post about but I need time to get this shoulder better, and get the new dog settled in and get the computer fixed. See you all soon and sorry I have not visited as many as I would like.
Posted by simon at 1:52 PM 3 comments: 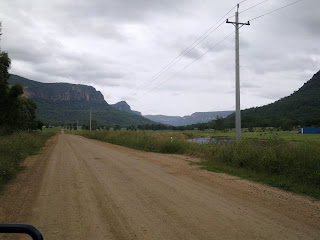 The road to Glen Davis
With no auctions for the weekend, but with wet wether it was time to explore an old mining town called Glen Davis. There is a bird sanctuary there and the promise of 174 different species plus the drive through the old town made it for and interesting trip. 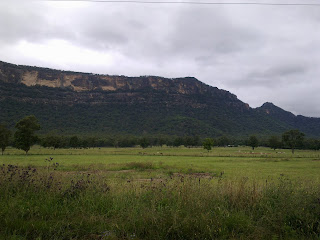 Some of the cliffs

Located about 45km in the beautiful Capertee Valley,(worlds widest canyon), Glen Davis was another old shale mine town, close to being abandoned apart from a few "die hard" home owners. The drive is also interesting as you border the Gardens of Stone National Park. I rather like the name, so a quick drive up some of the trails was in order. Whilst I did not see 174 species, there was still a nice view of Red-Rumped Parrot, Turquoise Parrot as well as Superb Fairy Wren. People with massive telescpoes and camera lined some part s of the road- a clear indication that the site is excellent for birding. 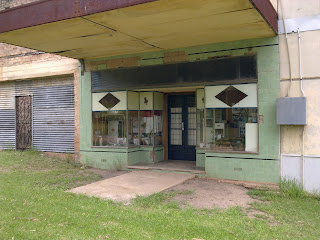 On Sunday I loaded the trailer with the motorbikes, esky, food , fuel, first aid kit and fishing equipement for the boys to enjoy a day on the farm. I sat under a tree by the beautiful fish river and red a book whilst the boys knocked themselves out for the day. 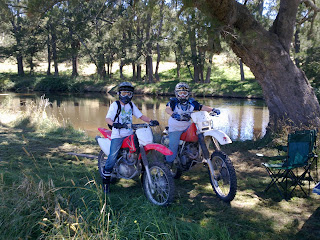 Ready to head out.

After many hours of riding and fishing it was time to head home. 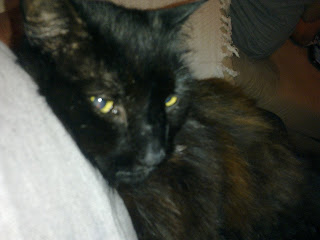 Later that evening I kicked back with a beer and me old mate Midnight to watch some mindless DVDs.All in all a TOP weekend more than making up for the previous "fizzer" :o)
Posted by simon at 1:51 PM 12 comments: 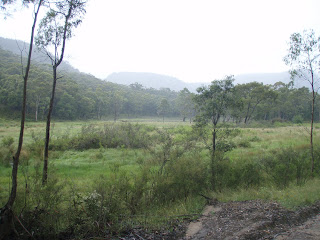 Every now and then some things in life turn out to be fizzers, despite the best intentions and despite the "power of positive thinking". Last Sundays walk was exactly that (as too was Christmas and New year for that matter but that's another story for another time perhaps).

There is a sign in Hartley Vale that I have driven past for years, that indicates a walk along an old railway culvert leading to some historical ruins.
Hartley Vale is a very historic shale mining town with some great old buildings, the shale being mined to make kerosene, paraffin and candle wax.

It seemed to promise a great walk.

Well, it didn't. It was a road that leads to houses, and a HEAP of "keep out" signs, After 7kms of walking in the rain, not even the fresh air could revitalise my spirits. I simply walked back in the Cruiser and said "fizzer".

As for Christmas and New year. Lampoons Christmas is not far from the truth, and thats a story for another time.
Posted by simon at 2:00 PM 13 comments: 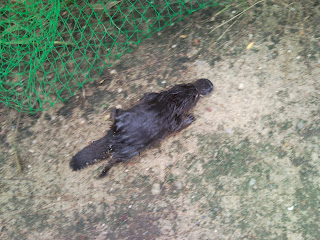 This blurred shot is a platypus that David found whilst fishing.
What is a Platypus? A.
"The Platypus (Ornithorhynchus anatinus) is a semi-aquatic mammal endemic to eastern Australia and Tasmania. Together with the short-beaked and long-beaked echidna, it is one of the three species of monotremes, the only mammals that lay eggs instead of giving birth to live young. Like placental mammals and marsupials, the young are suckled by the mother. It is the sole living representative of its family (Ornithorhynchidae) and genus (Ornithorhynchus), though a number of related species have been found in the fossil record."

"Platypuses live in burrows they dig in riverbanks, and hunt for their food in water. Their bills are equipped with very sensitive electro-receptors, with which they can sense the movements of tiny crustaceans and larvae on the bottom of rivers and creeks."

"Whilst some may say it has a unique appearance similar to that of a beaver with a duck's head, it really does not look like that at all. It is covered in fur, and its head is flat and streamlined for swimming under the water's surface. Its bill is different in shape to that of a duck, so even the term "duck-billed platypus" is a misnomer. It has webbed feet, claws and a flat tail, and lives in burrows in riverbanks."

"The bizarre appearance of this egg-laying, duck-billed mammal baffled naturalists when it was first discovered, with some considering it an elaborate fraud. It is one of the few venomous mammals; the male Platypus has a spur on the hind foot which delivers a poison capable of killing a small dog or causing severe pain to humans. The unique features of the Platypus make it an important subject in the study of biology."


It was with much excitement that David caught it and released it a little away from all the fishing equipment. 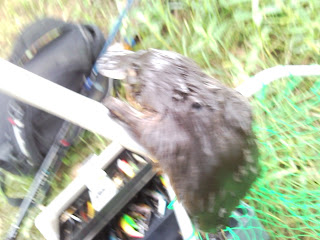 I have to say that its a privilege to live in and area surrounded by such things. Many boys grow up living their life behind a computer or X- box without experiencing the beauty of the real world, and as the world changes I fear that such oppertunities will decrese
Posted by simon at 12:56 AM 7 comments: