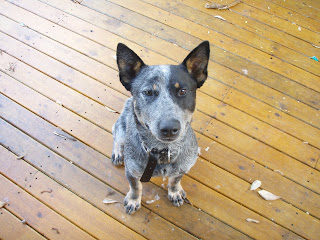 Slept on Simons outside chair and then remodelled it.

Bit the end off a clay flower pot, which had strawberries in it and spread the dirt all over the deck.

Pulled the washing off the line and slept on it.

Opened the outside fireplace by removing the grill, and removing a burnt log, which I smeared all over the deck and ate the strawberries even though green.

Chewed the end off the hose.

Dropped a turd right in the middle of the pathway- just to test Simons reaction if he stepped in it.

( I cannot understand why he gets stressed in wet weather?!!) 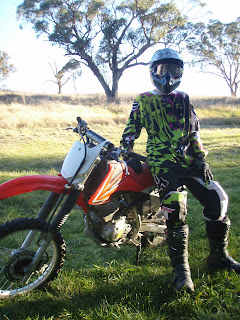 Can they co-exist? I mean birding is a quiet activity. Motorbikes, (especially 2-strokes), are noisy affairs. So this weekend we took to the bikes to 2 separate locations. one on the farm to a beautiful valley called Tarana, the other to Pacific Park, where the boys can let their hair down on a motocross track, enduro tracks and trial riding trails. All in the name of exhausting themselves. 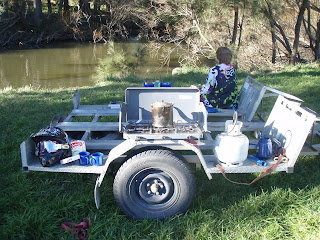 The Bike trailer with cooking set up- ensures a nice cup of tea, hot lunch or cold can be available for hungry riders.

Well I can say bikes can certainly be an effective means of birding. I even had a ride, ( against doctors orders), and flushed out a pair of Stubble quail! When I was younger I enjoyed the motorbikes I had. There is a certain sense of freedom with them.
After hours of riding the boys were covered in mud from head to toe. Daves CRF150, and Logans new CR 125 motor cross bike performed well and both boys rode exceptionally well too. Both boys are growing so fast, its really difficult to keep up with their energy level. 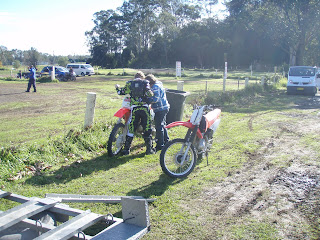 The boys fueling up the Honda CR125 motorcross bike- this bike is seriously fast! 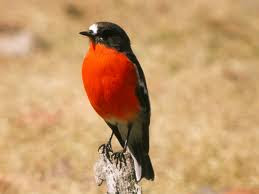 Flame Robin- Its "red breast" is more of a flame orange then red.