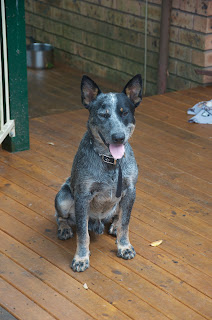 I  have some sad news. Dear Nip is blind. Its happened all so  suddenly  and explains a very  rapid shift in his behaviour-from confident larikin, to a nervous dog, especially  at night.

We are going to  have more tests done, however as a young dog, and with  such a rapid shift, we fear he might not cope and have time to  feel his way a round his environment.

On Australia Day  we celebrate Britains historic arrival on these shores. To  celebrate I  thought of nothing better than to have a beer, a prawn ("shrimp" if you are American), to watch  cricket and to  fit side rails to  my  Landcruiser.

What are side rails, I  hear my  overseas friends ask. Side rails are bars that attach to the bull bar, (or roo bar), run along the side of the vehicle and attach to the chassis behind the cabin. They are designed to push scrub, and reduce the impact damage that an animal  can cause. 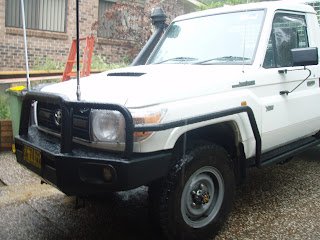 This is my  side rails. A neat  fitting job even if I say  so  myself!

I  recall being at a Japanese wedding  which  was being held on Sydney  Harbour- an amazing affair, and I recall the Japanese guests being  fascinated by the bull bar on my Nissan Patrol. It was the topic of conversation for hours.

There are many types of bars to  suit many  different types of vehicles. If you  work or travel a lot on cattle stations then  you  really  need a Tuff Bar.  These bars all but block any chance of an animal damaging the radiator and sides of your truck. However that  can  be very  heavy and drag the front suspension down. The Crusier in the photo below must have had after market springs fitted. 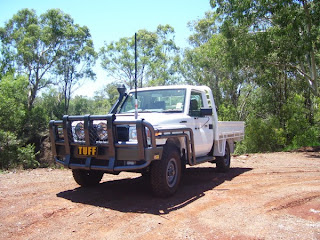 This bar sure looks Super Tuff! It looks like part of a bridge. Note it has 2 side rails on each side.

Due to  the drama I  had with  a certain manufacturer, my  new Landcruiser is fitted with a genuine Toyota bull bar, and so I  bought genuine side rails to  suit. I am  happy  with the design.

Fitting the bars was a methodical affair  and with  clear instructions we had the side rails bolted on and painted in a  couple of hours.

At the end of this process a nice icy  cold can of Victoria Bitter was had and enjoyed.

Recently  I  have had the pleasure of doing a number of walks in various national parks and have seen some birds that I  have either not seen before or have not seen for a number of years. 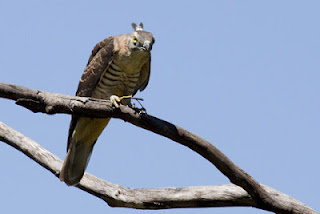 The most  striking was the Pacific Baza. A bird of prey  with a distinct "top notch". Its flight is soaring through the canopy, and underneath  its wings are quite translucent. I  spotted this at the Illawarra escarpments whilst at motocross training. ( not my  photo) 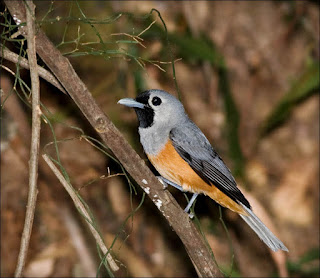 The other was a Black-faced Monarch. Part of the flycatcher group, this inquisitive little bird was quite bold when  we spotted him along the Burralow creek in the Blue Mountains National Park. ( not my  photo) 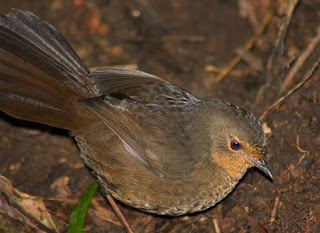 The third Bird of interest was a Pilot Bird. A duller coloured bird that  seems quite busy  scratching on in leaf debris or on lower trucks of rotting trees. Again seen in the blue Mountains National park near devils Hole. 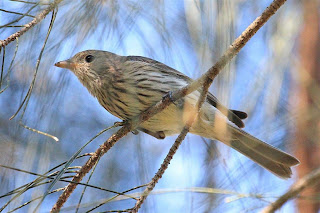 The fourth bird is a Striped Honeyeater. This lovely  bird was seen near the Willandra creek and again was quite curious as to  what I  was up to. ( not my  photo). 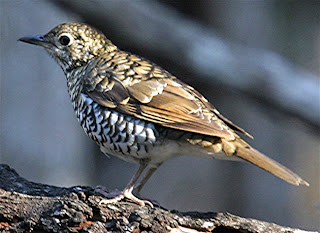 The final bird is a Bassian Thrush. This shy  bird is often found on the ground, taking to  tree beaches and sitting quietly  if disturbed. They  have a very  "soft" distinctive eye and a lovely call. (Photo by Geoffrey Dabb)

Birding is always good. A good excuse for a walk, a good excuse to really  take the time to  have a look around you. It does not matter if you  are in a national park or on a race track..there is always something to  see. 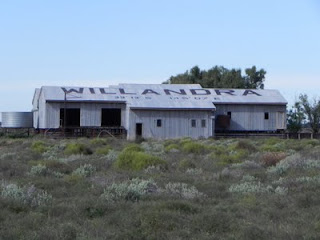 As you  know Willandra National Park is a favourite of ours. Its an iconic part of our pastoral history, it allows you  to  enjoy the plains of outback NSW, with  stunning sunrises and sunsets. Some sections are harsh whilst the historic home, the creek and outbuildings provide and oasis away  from the heat. Of course all of us enjoy it there and think fondly  of friends and good times. 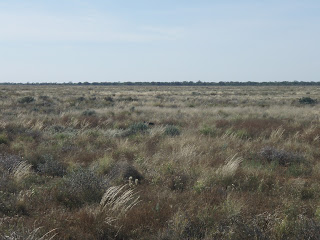 The "One Tree Plain." Flat  and as vast as the eye can see. (unless you  use binoculars..then  its even further)

However, it did come as a surprise when my  daughter asked if she could have her 21st birthday  there. I  was delighted. She had invited some of her American friends over for Christmas and we all agreed that  this would be a fabulous place for them to  get a taste of rural Australia. 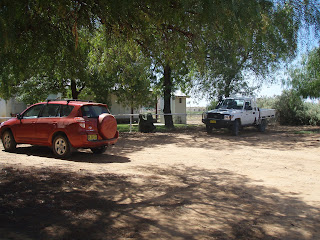 Arrival at the Overseers Cottages

Rather than  camp, we chose to hire the Overseers cottage. Many  of the greater rural properties generally had a huge homestead for the owners, a managers home, and overseers cottage and then shearers accommodation.  The cottage is neat, clean and tidy. For Susies birthday lunch we were granted the use of the formal dining room in the homestead. 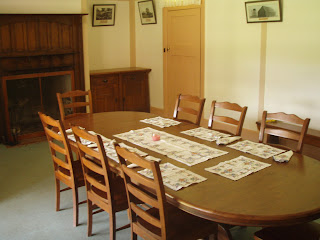 Christmas itself was quite intense. A full traditional day consisting of Turkey, Ham, roast pork, plum pudding as well as salmon mousse. Seafood consisted of 3 kg of king prawns and a few dozen pacific oysters. Cheese, sweets, and a variety  of beers, wines and champagne. We have not done this for some time, as its easier to head to a restaurant for Christmas day.  The work load, oven, dishwasher did not stop from early  morning to  evening as guests came and went. A Willandra sunrise over the Willandra Creek Billabong

It was 11pm by the time we had packed for the trip out west. Leaving early, the journey  was uneventful. Tar all the way  to  Hillston, where re fuelled the Rav4. The next 80km is on a dirt "dry weather only" road. I  was very  pleased that  there were mobs of emu and kangaroo in such  numbers that it would have made Qantas proud. Our visitor was delighted to  see this. 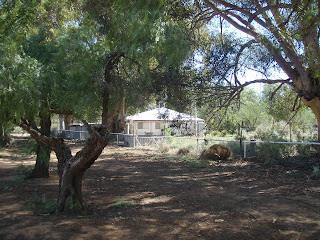 Managers Cottage. In  the shade of a row of pepper and olive trees

On arrival we discovered that  there was no water! Not to the cottage, nor any other building. We learned there was a power blackout a few days before and clearly the bore pump had switched off. Despite our best efforts to find a switch we failed. Fortunately  I  always travel with  60 litres of drinking water. However this was not going to  be enough for cooking, washing and drinking over 3-4 days. I  made the choice to drive 80k back to  Hillston to  buy what  extra water we could. The BP servo, was open and I  refuelled, purchased an extra 40 litres of water.

Toyota Landcruiser off to get water.

Functional washes using what  water I  could get from the water tanks on the home, (uncertain as to  the quality we chose not to use it for cooking or drinking). Basically  a bucket, and a dipper you  have to  be quick. For a brief moment I thought I  saw our American friend go green.

Susies birthday lunch was a traditional roast lamb with all the trimmings as well as french  champagne. Cooked in the gas oven of the cottage, placed on the back of the Landcruisers tray and driven over to the formal dining room. 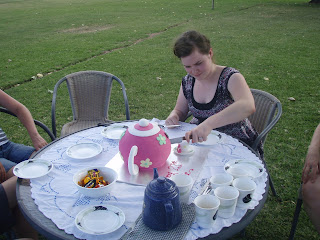 Susie cutting the birthday cake made in the shape of a teapot.

It was a brilliant meal. Later that  afternoon we had afternoon tea and birthday  cake under the shade of a tree on the manicured lawns. The Willandra creek billabong making a beautiful backdrop, as Whistling Kites soared overhead.

The following day I  chose to  get up  early, as the days were reaching 40c, and drive the Merton trail. It  had not been driven on for some time and so I was delighted to  see a full array  of wildlife, including feral goats and pigs and a Geep!  A Geep is a cross between a goat and a sheep and they  look amazing! I  assume they are like a Mule... 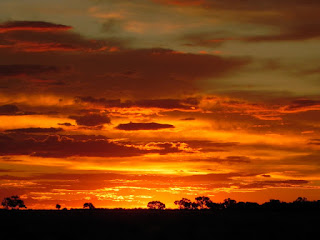 The afternoons were too hot to  engage in too much activity so we cruised around the homestead and relaxed with  beer in hand. Susie announced her engagement and is heading off the the USA for 4 months.

Willandra has become a very  significant place for us all. It was our good family  friend Jims last trip, Susies 21st and engagement as well and many  other fond memories.

Again, this is a trip and christmas we shall never forget.

(Note:- All meats and vegetables in this post are "free range." No human was harmed in their processing)
Posted by simon at 2:52 PM No comments:

The things we see

Sometimes I  just have to wonder. Has the township of Parkes found the secret to incredible Olympic performances? This is Parkes public pool. Look at  the sign. 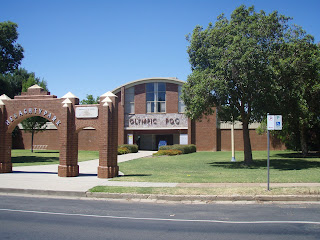 We saw this whilst travelling to Willandra for my  daughters 21st birthday.  I am  not too sure I would like to  swim there!  More on the trip soon.
Posted by simon at 4:06 PM 1 comment: