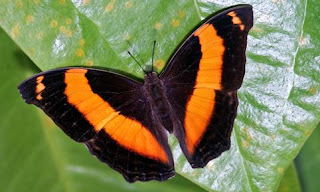 With back burning operations occurring in the national park, Dave and I thought we would walk the fire trails before the fires reached our favorite spots. A beautiful warm day, with a light breeze, it was not too long before we spotted Lewins Honeyeater, Whip Bird and Eastern Spinebill. Last week I observed the Glossy Black Cockatoos feeding further down Wool Wash creek. 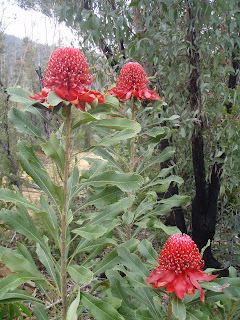 The Warratahs were in full bloom and they looked superb, as too were numerous other flowers. Butterflies were in abundance and we noted this one we had not seen before, looked it up and I thought "what a funny name for a butterfly"..so I posted it.

After a 2 hour walk talking about motorbikes, bushwalking, birds, we returned home hot, sweaty, and tired but all the better for it. I hope the birds and animals will be ok with the fires that will soon appear.

Later that afternoon we went for a motorbike ride. Heaps of fun and quite eerie with the fires burning alongside the track.


NOTE:- Full apology to SOSSA. I was booked to be on the boat today, and got the date mixed up with next Sunday. My own stupid fault. Worse still the boat sits in harbour and waits... So, to Lindsay Smith and the 12 or so people waiting for me .... I am utterly sorry.. I will gut fish, swab the decks, turn the sausages at the next meeting to make amends. Its the least I can do.

I previously posted about my family history, and realised that one of the newspapers is doing the same and using some of the photos I had posted. This history will be published in "The Land" newspaper next month , so I thought it best to withdraw the post from my blog until after the article is published.

So, here is my first ride:- 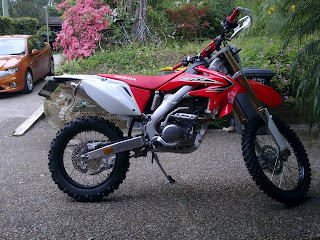 On Sunday, with the weather typically warm, sunny and with blue skies I chose to ride the bike to Mountain Lagoon. Its a particularly favorite spot of mine and it is a ride that, not to long ago, I did on my mountain bike.

The ride takes me through, and across Wheeny Creek before winding its way up into the mountains along a dirt road/firetrail.

I must confess that I had more confidence on the tar road as I have not done much dirt riding for many, many years. 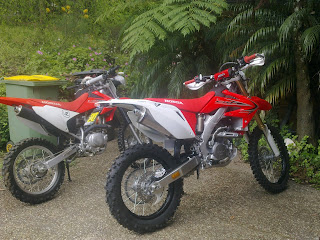 Daves bike and my bike.

The bike performed really well for a 250, with a lot more power than the ones I rode as a kid. It was not too long before I was at the lagoon, with purple swamp hens enjoying the waters edge.

On the way back I spotted a dingo which was quite exciting and rare. The ride requires a degree of caution as the road is narrow with blind spots and hairpin bends, the risk of being hit by a 4wd is there. 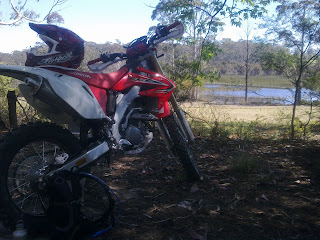 Later, I rode the firetrails which are quite rough and had to cross a fallen log. I had forgotten how to do that and got stuck halfway across before recalling what I had to do. Second time around was sucessful both ways.Then I rode through a creek and nealry swampped myself with mud....

After I returned I was really quite sore but satisfied with the way it went. The bike will now need its first service after 120km of travel.
Posted by simon at 3:32 PM 6 comments: 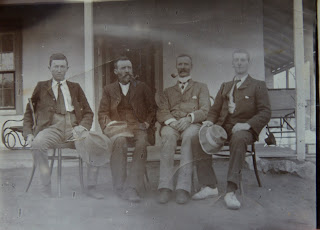 I have recently discovered and am researching my families pastoral history here in Australia and our links with the Darling River. My great grandfather, Plummer Cotter and his wife Mary, had three children born in a town called Wilcannia. For my overseas friends, the Darling River is one of the great rivers of the world and would be similar to the mighty Mississippi. 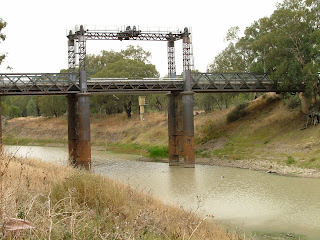 Darling River at Wilcannia in drought 2006

Wilcannia Is situated north of the Menindee Lakes and was Australias third largest port. Paddle steamers worked the Murray-Darling river, and with the boom in the wool trade, mining etc, Wilcannia thrived. Today Wilcannia is a shell of its former glory. Many of its old buildings remain,sadly many have become burnt out. 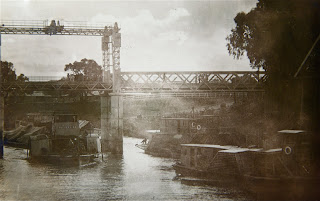 Darling River at Wilcannia with paddle steamer "Tolarno" circa 1906

The town itself is on the Barrier Highway east of Broken Hill. Many travellers refuse to stop in this town. There has been a history of riots and violence.
The three children were Margaret Valentine Cotter, James Cotter and Frank Cotter. Frank is my grandfather. 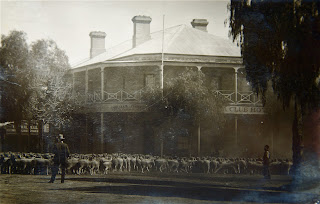 Sheep in the main street of Wilcannia circa 1900

The most significant piece of this history is the property called Thurloo Downs. Now a 1.3 million acre holding owned by Mr Peter Hughes. Plummer and his sons managed this property which included Elsinora Station until 1907. Set further north, between Wanaaring and Tibooburra in the States north west. The Paroo River features in my family history too, and it flows into the Darling river. I have recently discovered that Urisino was also incorporated with Thurloo and Elsinora. A huge area of land 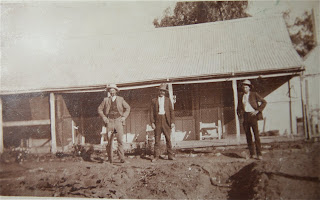 You can enlarge the historical photos and see the men and their work. My family worked for the Killens, Sir Sam Wilson, and the McGraths. I shall post more soon.
Posted by simon at 3:14 PM 3 comments: 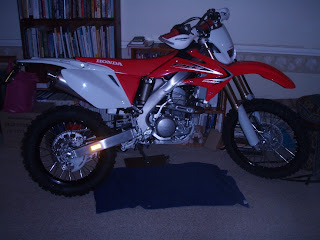 This is the new bike. A Honda CRF250XB. I shall ride it where I used to ride the mountain bike. I guess its what they call "retail therapy" and being stubborn, is my way of Keeping moving!

First ride is planned for Sunday
Posted by simon at 3:42 PM 7 comments: 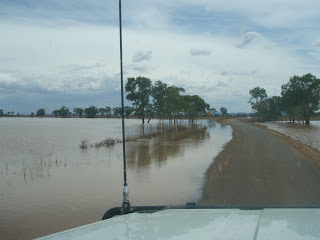 In the outback we crossed flooded roads... 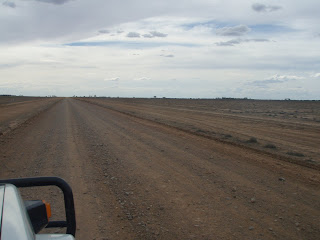 ...and travelled straight, rough tracks for hours and hours.... 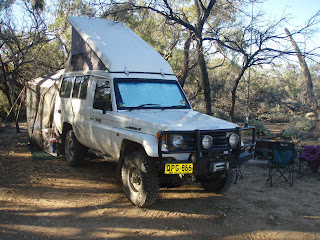 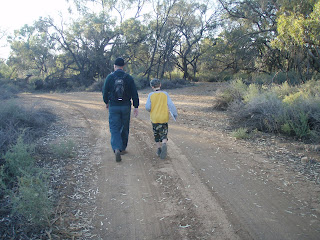 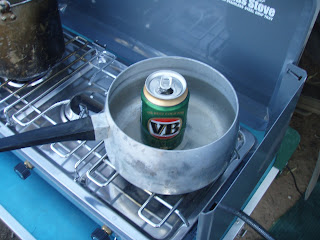 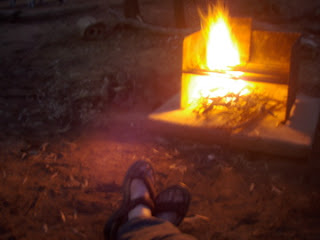 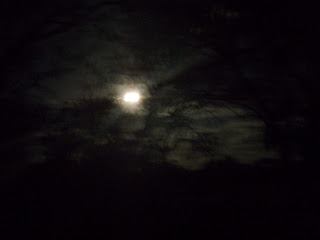 As the moon becomes a ghostly galion tossed upon cloudy seas....... 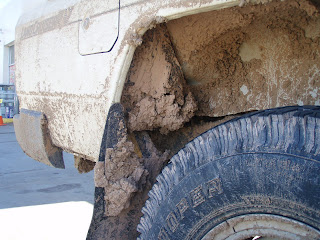 Before returning through flood waters home. 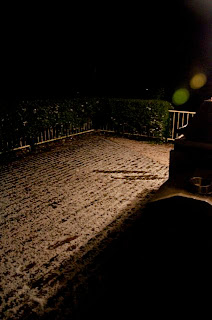 I think Gulia Gillards carbon tax is working. Even before its got up in parliament, the weather seems to be in fear and retreat. ha ha.....
Ten days ago the bush had become power dry and a bush fire erupted in Leura, which is not too far from here. I got my house prepared for the fire season, (see previous posts), taking a day off to clean gutters and get the fire pump serviced. Then, within days, the temperature plummeted, and last week it rained and stormed. (See last weeks post on the Pelagic trip). 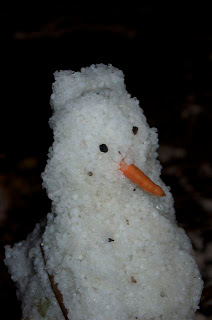 The snowman!
A few days ago we had a wind storm so violent it picked up our 13 foot trampoline and hurled it across the yard damaging the clothesline. It was lifted high enough to fly over some small shrubs and trees. Today we pulled the thing part and loaded it ready for the tip.
Then last night, the temperature dropped suddenly, the evening went white, then it hailed. Enough for Dave to make a snow man and for Nip to run around like a lunatic eating snow and ice. Both boys enjoying the weird weather! Nip ate the snowman. (Parts of it had turned yellow....Nip. woof!) 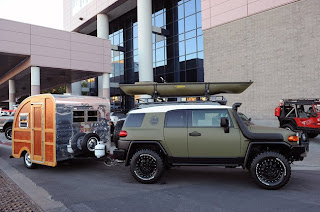 I like this set up and the retro van.
Again I went out to do the firetrail bird survey and again it was cold, windy and wet. The only bird was an Eastern Yellow Robin. All others were silent as they hunkered down in the wind and rain.
As I walked with Dave, I got to thinking about my mobility and the operation in about 12 weeks. I was really looking forward to getting the Fj Cruiser and setting it up like the one above but it looks as if production has been delayed, which is frustrating. So I got to thinking about other forms of transport. I decided not to buy a quad bike, as I thought, a few months back. The statistics of accident are startlingly high. Fatalities are also way above average. The college of surgeons here want the government to legislate to reduce the top speed and to provide roll over protection. I don't think it would suit me for that reason. 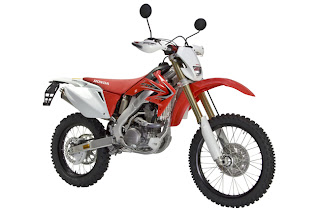 So, I decided to buy this. A Honda CRF250x. Similar to the Motocrosser but with electric start, and a wider ratio gearbox, it will be easier and more forgiving to ride. I am not sure how my hip will go but I am going to give it a try..Having ridden bikes all my life I will enjoy even one ride! It will motivate me to get well too and get out and enjoy the bush. Being registered should not cause drama when I ride along the roads in the National Parks. It arrives in a week. The best part is I got a $3000.00 discount for the last 2011 model and that makes it super cheap.
I am going to see if I can get a small rack to put my birding, camping equipment incl a small stove for a hot cup of coffee on the trail!
Birds seen today. Red Wattlebird, Eastern Yellow Robin.
Posted by simon at 6:13 PM 7 comments: