Its a little late but better late then  never. We decided to  head out to  Hungerford, at short notice, on Boxing Day.

In previous posts we have spent some time there and enjoyed the national parks as well as the cattle stations. 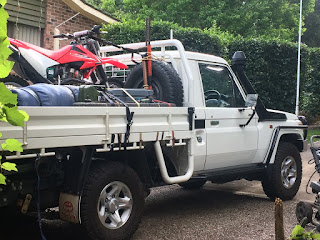 I  am  not sure what it was, but I have to  say I  was a little apprehensive as I  packed the truck on  Christmas day. My  friends and family  put in  an order for Christmas of -10 cases of beer! lol! So by the time I  had finished packing I  had 700kg on the tray.

We left at our customary 3am, and headed out.  On a previous trip I  had my earlier model Landcruiser play  up as we got bad fuel. So since the purchase of the new one I  have been  particularly fussy  with  where I buy fuel from.  To  bore you- The land cruiser has 2 fuel tanks and now when I  travel I  keep the main task full with fuel from a trusted source, preferring to  use the rear, ( sub), tank as we go. I  fuel up  at  BP along the way.

This was a trip to prove even the best laid plans of mice and men.....


The trip was leisurely through Dubbo and onto  Nyngan. I  do  like to  stop  at the the park by the river at Nyngan. the bird life there is really  good. It has always been  a favourite spot for a cuppa, and a spot of birding. 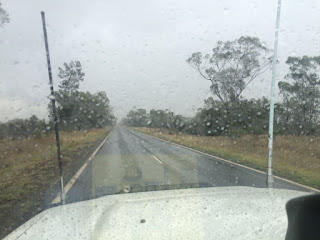 Rain! Welcome sight on the way to  Bourke.

After a short break, we pushed on to  Bourke. 215km boring road. I  reflected that, as I  child I  remember seeing the trains heading to  Bourke, the Abattoir working and what I  though were the largest ploughs working the soil beside the road.

Today- nothing. The rail line is in  ruins, as too the Abattoir, and I  rarely see a tractor working.

We fuelled up  in  Bourke at the BP, and hit the Dowling track. Passing through Fords Bridge, I  recalled how my  Pop would talk about having a few beers there after a hard day on Pirrilie Station

It got me wondering just  how tough the men and women were. My  cousin, Roy Dunk rode his horse the entire length  of the Dowling Track, carrying spare shoes etc.

The road was pleasant and not too rough and as rain began to  fall, I  hoped it would not turn the track into  slush. 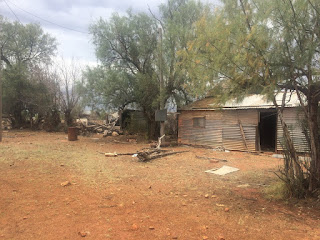 Further along we stopped at Yantabulla. There are some swamps there and  is good birding. Brolga particularly  like it.

Sadly,  Yantabulla is like a movie set from  Mad Max.  A ghost  town, and there was no water to be seen.
After a short break we were on our way, Past  our cousins property "Warroo", and onto  Hungerford 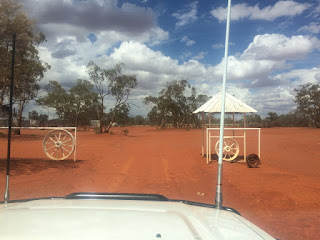 The pub was closed for Christmas, so  Dave and I had a Ginger beer on its cool verandah. I  chose to show Dave the Hungerford Showgrounds and Dunk street. I  confess I  do  like Hungerford and its people. They are just  great.

We soon arrived at our destination, and stopped in the Shearers Quarters.  All delightful.

First "Disaster"- I  had not packed enough  food. I  had left half of it at home. David with all his motocross, and gym work is like a termite, and without snacks/drinks/bigbreakfast/lunch/dinner/morning tea/afternoon tea and a midnight snack.. he is just  not himself..  I  thought "mmmmnnn" I will just  push on to  Thargomindah and buy some groceries the following day"... 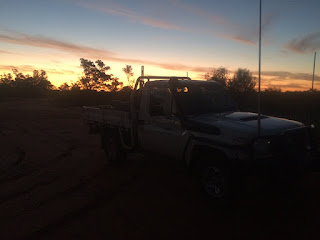 A welcome sleep was had by all.

The following day Dave and I  drove around to  Lake Wyara and Lake Numalla. After driving in Semi Arid conditions, avoiding boggy sections of track, we arrived at Numalla.

Its was extraordinary! A beautiful blue lake, with  white sand and bird life in abundance. Australia always delights me. Just when you  feel hot and bothered, up  pops something you  don't quite expect.
After walking some distance and spotting quite a few new bird species, it was time to head back. 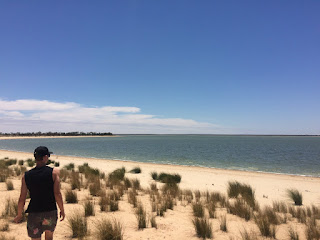 A welcome evening meal was had on our return to the shed.

The following day, Dave and Greg headed out to  do some fencing using the motorbikes this time for transport.  I  decided to head over and visit my  cousin Frosty for the day, to  have a cup of tea and a nag.

It still fascinates me every time I  look at the fences, Pop always spoke of repairing and building the dingo ( wild dog fences). Sadly,  much  of the old fence lines are in ruins as the change from  sheep to cattle has occurred. 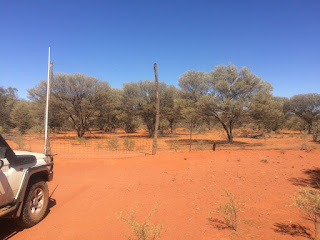 After some more birding, I  headed back to the shearing quarters..

Disaster 2.. we were low on  fuel, and discovered that the servo was not open between xmas and new year. Neither were the shops. With the Hungerford Hotel closed (  food/fuel etc) we were left with the prospect of being stuck. So, Dave and I  made the call the head home. Yep.. after 2 days...


Disaster3.. As we headed back, the cruiser went into  limp mode... I  quickly  switched fuel tanks to the main which  still had 1/4 left of city  diesel. I  could tell straight away that the motor had sucked up dirt and sure enough the warning light came on.

Distaster 3...At 90kph, an emu, which  was heading away from the road, decided to turn around and aim straight at us.  I was on a particularly sandy section of track and at this speed had no prospect of slowing without risking a rollover. I hit the bird killing it instantly, but bending the bull bar.. and stoning the windscreen (how, I  don't know).

We limped into  Bourke, and limped back to  Sydney. 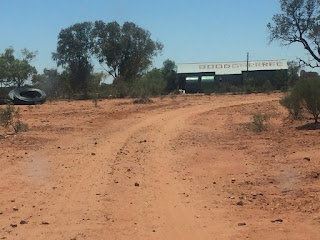 1. Must  fit additional fuel filters to the V8 land cruiser, and carry spare ones.

2. The genuine Toyota "bull bar" is almost pointless. The bar now has plastic inserts and buffers. Its too weak and the cost or replacing the broken plastic is hundreds of dollars. The bar is a nice city bar, but a 4 post TUFF bar will be the more suitable. I  don't do "off road" stuff so  approach and departure angle is not important. I  do  spend a lot of time on roads and cattle stations, and even to nudge cattle out of the way, well the toyota bar offers little protection in  fact.

Anyway, its always nice to share time with your son!

For me Highlights- Dollar Bird, Brolga, Rainbow Bee Eater. I  note a lack of Wedge-tailed Eagles.