North  of Hungerford and through the Currawinya National Park is  Boorara Station. Owned for nearly  100 years by the MaGrath  family,  this iconic cattle and sheep station has featured for many  years in our  own Cotter history as well. 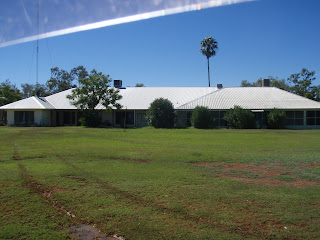 Fred Cotter managed Currawinya and Caiwarro which  lie to to the south and east of Boorara.
To  the west Kilcowera and Boodgerie were once a part of this property  before Allan MaGrath  sold them  off in  the 1960's.  As I write my  son David has the privilege of mustering for Greg and Toni Sherwin to  the west. 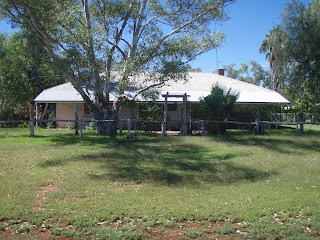 The Managers Homestead which  sits alongside the owners home.

Boorara is capable of carrying 3000-5000 head of cattle and is home to  a variety  of wild horses, pigs and goats which we saw on the way in. It's good country.

During the last 10 years "old fella MaGrath" allowed the property  to  cruise along- and rightly  so. His father was a "hard bastard". Our family  often spoke of him in hushed tones he gave no quarter.  There was no leeway in his mind. Late for an appointment to  discuses fixing fences and he would tell you  to  "piss off". 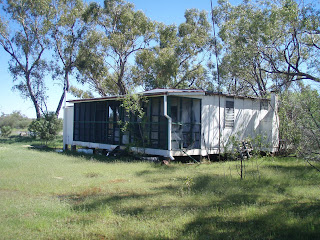 Sitting opposite the homestead and across the airstrip is the home  that  James Henry  Cotter lived in. ( photo above). It  backs onto  a lagoon and the view from the back is breathtaking.

Some of the iconic parts of Sydney  are named after this family McGraths Hill (note spelling has changed), and McGrath  house in Penrith.  "Old Fella" McGrath  paid Jim  Cotter a wage even in  retirement.  Its hard to  find such a commitment from both  employer and employee today. 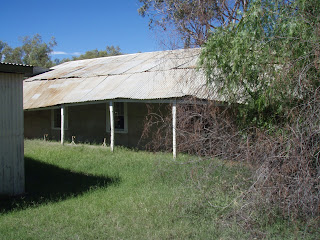 The original Homestead which sits alongside both the managers home and owners home.

Old fella MaGrath told me of a story  of Jim riding a Harley  Davidson from the entry  gate to the homestead in  a few minutes- this making and average speed of about 70mph.. Jim  had won many a race on a horse at Hungerford, Tilpa, Louth and Wanaaring, so  this  speed comes as no surprise.

We were told that  Jim  was also the first to use motorbikes as boundary riders units with  side car in the district. A brilliant idea and still  used today. 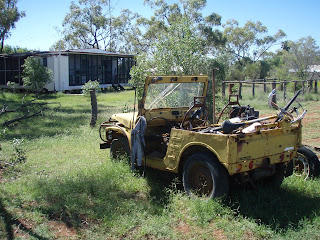 In 1984 I  met old fella MaGrath.  He came in to  buy  a 2nd hand engine for an LJ50 Suzuki. I  had no idea who  he was and delivered the engine care of Hungerford Pub. Today  a Suzuki sits in front of Jims old home. Recently  he reminded me of the purchase. I  asked him  if it lasted ok... It  felt strange. 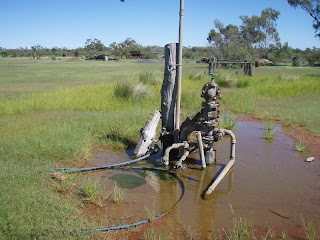 So  what  of Boorara today?  This iconic property is on the verge of collapse.  All the bores  leak. The homestead bore to  such  an extent that Jims cottage now sits in the lagoon itself. You  cannot walk to  the homestead without getting up to  your ankles in water. The pise walls will  simply  soak up  this water and then  collapse.  The fencing on the western boundaries are now marginal and there is no infrastructure to start up. 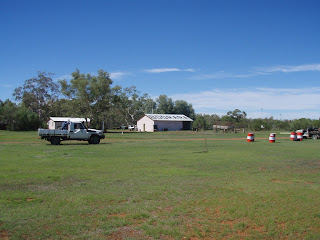 Some of the Sheds and the end of the air strip

I  mean, no poly  pipe, no dozer,  no grader, no usable trucks or tools or steel panel or fencing wire.All were sold off  recently in a clearing sale. Even the brands.

Its a classic example of someone who  wants to  have a gin and tonic in front of the fire place and not put in the hard yards.  What  it requires is steady  commitment and an understanding that the stock come first. Frankly  you have to  be born to it.

Today Boorara sits idle. Doors open. Run down. Can it be brought back to  its former glory?

Time will  tell. There is a story  of Caiwarro where, after the clearing sale they  used a bull dozer to  get the Billiard table out of the home... I  walked across Caiwarros old tennis court and wondered if this was the fate of Boorara.

Elsinora Station. We are off...

..for a well desered break in outback QLD. Not far from where this photo was taken. This is my  grandfather, Frank, on the horse "Handmaid". It won quite a few races at Wanaaring, Hungerford and was used as a stock horse too.

This is a restored photo that was almost lost through fading and is another from the series that  was taken out the front of what  we believe is Elsinora Station, part of Thurloo Downs in outback NSW. 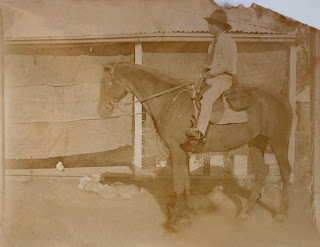 I hope to have a full series of photos restored showing the homestead, stock movement as well as more people.
Posted by simon at 4:07 PM 2 comments: 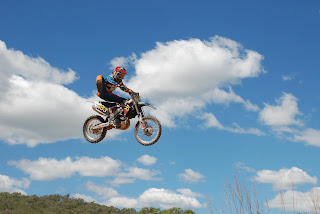 Here is another photo I  re-discovered. This was taken on the rubbish  dump at Mt Wood Station in October 2006. I  have titled it "Drag Race" 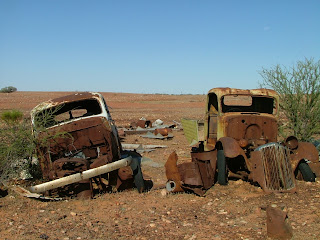 Mt  Wood is located just  east  of Tibooburra and is a fantastic spot to  have an insight into  the harsh  world of outback farming
Posted by simon at 9:46 PM 2 comments: