Tooralie National Park And the trip that was.

With the weather cooling and an  opportunity  to  head west, I  thought, "why  not encompass a couple of National Parks that I  love, some birding, and time spent in  my  favourite place, Hungerford.

The trip was simple- 7 hour drive to Willandra National Park with an over night stay. A relaxing drive to the Horse and Coach camp site beside the Darling River via Ivanhoe. A leisurely drive through Louth, across to Wandering and up to Hungerford then back to the new national park Tooralie, and finally  Gundabooka.

The idea was to avoid the major towns, spend some time and money  supporting the local businesses, (by paying a lot for fuel! lol!), and simply  relaxing.

It was a journey that had its highs and lows and before I  detail the trip,  I really  need to  get a couple of things off my  chest:-

Reality? Some nice signs, some stupid "copper art" thingos, a few park benches but no other facilities what so ever.

Now I  will be clear- I  can  camp in the back of my  land cruiser in a swag, dig a pit toilet and light a fire, however Nat Parks frown upon that  sort of thing. So, when they say they have the facilities and don't, well its a stuff up. Simple.

The second thing is- no mention, what -so - ever, of Tooralies pastoral history. Are we ashamed of it?

Finally- It  should never have become a national park- I have been  to  plenty and this  one is a dud. Its a total contrast to the Horse and Coach which  is in  a beautiful location, the facilities are superb, theres plenty  to  see and soak up.

Tooralie has clearly been a highly  productive cattle and sheep operation...and should have remained so. Its clearly a political purchase. Yes, its on the Darling and Warrago River, nice, but so  what? The Looping drive is a drive to nowhere, and then you are out the back of the park.  There is a small viewing platform on a hill at the south  end of the park with  lots of signs, but really?

We were the only  people in the park, and we did not stay, We pushed on back to  Louth.

Vehicle observations. GX/GXL land cruisers. I  have always had land cruisers and they are best suited for me. This is the first  one I  have had with the Toyota alloy wheels, and I  don't like them.

The wide wheels don't track  on the roads in  Western NSW as well as split rims do, and the amount of rock they  throw up is huge. The V8 Cruisers one point of irritation is the track at the front is wider than  the rear, and combined with a wide wheel pack, well, the front wheels sit well outside the original bodywork. It also exaggerates the "tram lining"effect. Whereby the front wheels struggle to track and the back tries to  follow the front. If you  are not used to  it, it can  be distracting.

I  never had an issue with the previous models, i.e. those with  split rims. So, the result is- the tray and back of cabin has been  sand/rock blasted to the  under coat.

Toyota convinced me to  fit a genuine winch bar.  Its no good for my  application. The plastic inserts and buffers damage very easily, and the Toyota badges fall off. They are $80.00 each and the plastic inserts are$200-300.00 each. We hit an emu at  Xmas, at moderate speed the bar pushed out of shape.

One thing I did do was  Fit a Water Watch additional filter system to it. Common rail diesels don't cope with  water or sludge and by the time the original filter warning goes off, it can  be too late. The water watch system works a treat, and with  an in cabin buzzer it gives you  plenty  of warning.

So, as a result of these observations  I  have ordered a new Workmate, with a TJM Outback Bar (no plastic bits).  The new vehicle will have a heavy  duty  tray  fitted as well, as the standard Toyota heavy  duty  tray is pretty  ordinary and sits up  too high.
I  want to  stress its "Horses for courses" when it comes to vehicles and everything its a compromise.

Now the trip!  We had a fantastic combination of staying in  managers cottages, tents and the pub. 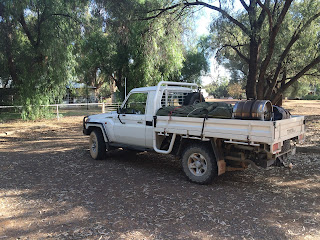 Arrival under the Pepper trees .

Willandra is looking dry and a bit run down, the bird life was low but we did get a good look at  Mistletoe bird which  was nice. Quite a showy little bird in the afternoon sun. The walks are great as too the pastoral history. 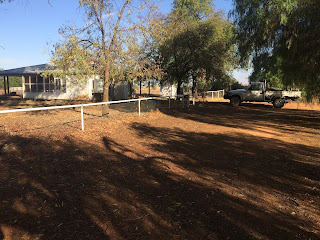 I  wonder if Nat Parks should re -stock with a small number of sheep to  assist the Plains wanderers habitat? just a thought. They are doing it with  success in other parks.  The income off the sheep could go somewhat  to  pay  for infrastructure upgrades, and maintenance. 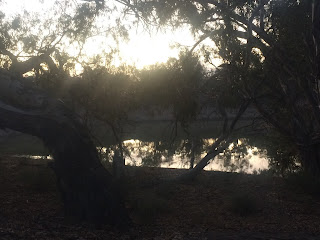 Evening on the banks of the Darling river

Horse and Coach- On the banks of the Darling River, at a bend, its where the old Horse and Coach  Inn  was, and is a Cobb and Co  stop over. About 50km North  of Wilcannia on the eastern  side of the River, its both beautiful peaceful and a credit to the National Parks. Great  facilities for sure. 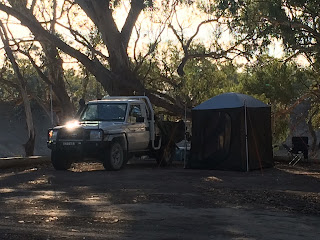 Camp site. The Oz tent screened enclosure was all we needed.

Louth- What a top  spot to stop. Clean fuel, good food and cold beer. A good chat to the owners, and we realised they  knew most of the people we know in the district, which  was good. Here we chose to cross the river and head to  Hungerford Via Wanaaring. A good choice albeit the road was rough in  some sections. 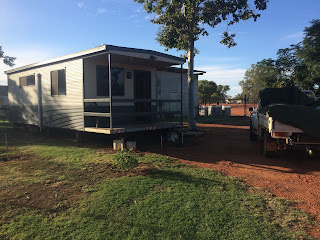 Our accomodation at the Hungerford hotel! Quite luxurious in fact!

Hungerford- Population of about 7 and on the banks of the Paroo. The Royal Hotel has good food, cold beer and good company. 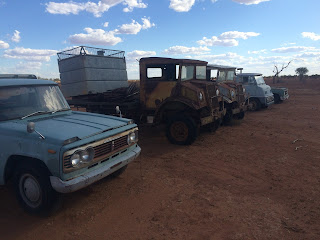 Some old vehicles on my  cousins cattle station.

You  can  chat to the locals and I  find it a really  good spot to relax and see life from  a different perspective.

Tooralie- ( not worth  a photo). Save your fuel, time and effort. Its simply  not worth the trip or detour. 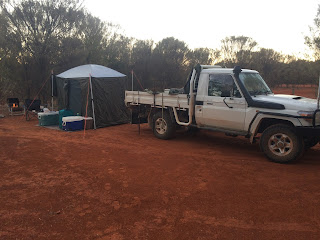 Gundabooka- We had the park to ourselves, there are good facilities and the walks are fantastic. By this stage we had lost a rear number plate so a beer cartoon and a texta was used to  get us home. I  love the red soils and camping in amongst the mulga. This is one place where you  can  see just  how the aboriginals used various trees for medicine, for food to make flour  or to sleep on, etc. You  will get a fine education if you  put on your walking boots.


So, all up  a fantastic trip.