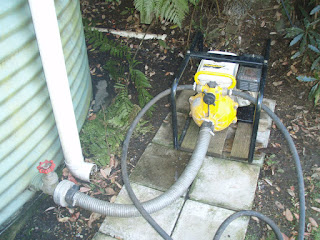 The 6 horse power fighter pump and hoses
Here we go again. Bush fire out of control to our west. Helicopters flying overhead with buckets, fire trucks in the street. I am so glad I neurotically clean my gutters and prepare my home with the fire pumps etc. I sit and watch the embers fall from the sky and wait....
3/9/2012 Update. The fire last week came within 200 metres of the houses and in some cases right up to the back fence. We had 120 fire fighters on the mountain and water bombers working for days. The fire is now just a back burn and the rural fire service and national parks officers will take advantage of the conditions to continue the burn off. This gives us about 5-7 years of safety from other fire threats.
It took me about one hour to have the house ready including all the buckets, mops, ladders gutters, the car and trailer packed. So I was pleased with myself.
Posted by simon at 10:44 PM 3 comments:

Bird of the Week. 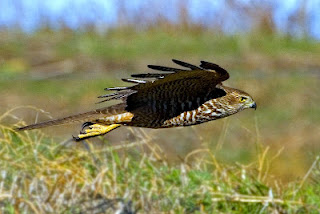 Brown Goshawk. ( Photo courtesy of Tassie Birds blog)
Well, I took the mountain bike out for a ride and went well. Its surprising just how quickly the body gets back into the swing of things. The bikes rear shock needs attention as its rebound felt awkward.
Perhaps the most interesting bird for me on this ride was a Brown Goshawk. Quite a common bird of prey they have interesting barring across the chest and a very long tail. It was not too impressed with my presence, which generally indicates nesting nearby. I hope so!
Posted by simon at 2:29 PM No comments: 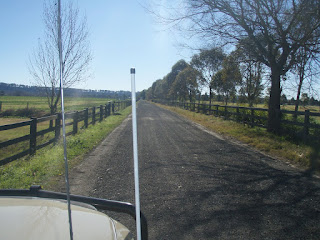 The dirt lane between the Polo fields.

In 2010 I was in England and I did a number of walks and a bike ride. On the day I climbed Skiddaw peak I noticed my right ankle was a bit sore. On the decent it got worse as if the nerve was being hammered. A few weeks later, I was riding a bike, in borrowed bike shoes and I crashed. The foot did not release from the pedal and I twisted the same ankle.
I put up with this until last year when I had surgery. 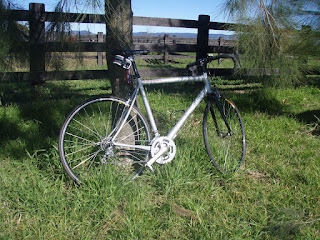 The Cannondale Synapse is an excellent training bike. ( Note its covered in dust!)
So, its been 2 and a half years since I really put training klms on a bike. I have done some small rides but really lacked inspiration to "hook in", and have done very little in the way of major walks. So my fitness has really suffered and I put on a bit of weight.

This week I decided to start some light training to get the ankle to flex and to improve my overall health and fitness.

I started in the Hawkesbury lowlands which is like riding through English country side. I have posted about it before. It was a steady pleasant 25kms and I hope to ride it every 2nd day. So far so good.
The ankle? well, it seems not to mind the rotation of the pedals however its still a bit tender, and perhaps it will never be right. 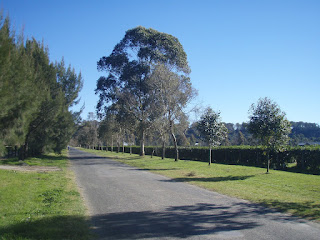 I have chosen the Cannondale Synapse to train on, as its light and nimble. I will move to the mountain bike once I have built up some stamina. It had been a while since I rode it, and its heavy by comparison. The Synapse was covered in dust, however a pump of the tyres and it was ready to go.