I  am  getting in  a little early, as we will be away  mustering in QLD.

Anzac day, (for my  friends overseas), is on the 25th  of April, whereby we remember those who  gave up their lives, and fought for our country.

I  am  honoured to have family members who served in both WW1 and WW2, and recently  Afghanistan.

Here is a photo of  Sergeant Guy Hamilton Cotter, who was killed in action on the 3rd of May at Villiers-Bretonneux, France. He serve in the 23rd Battalion of the Australian Army. 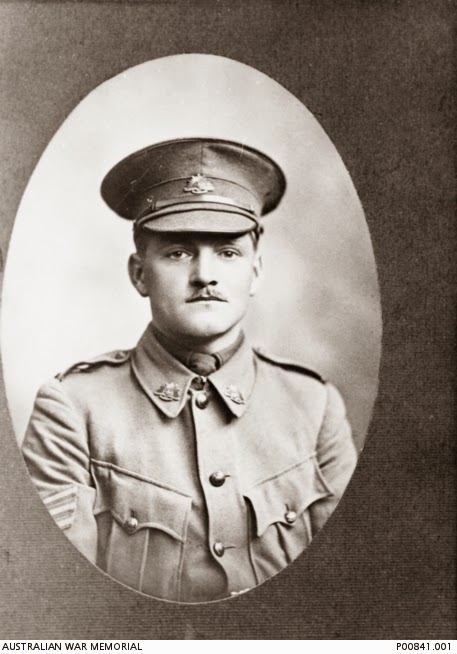 They  recently  found him, after excavating the battle ground. He was blown to  pieces whilst charging the german lines.

I  often think about this. Why? It seemed so pointless, and I  am certain that  the majority  of the French people don't give a "shit."

Guy was from Caiwarro originally, but grew up  later in  Melbourne Australia.

I  also think  fondly of Roy Dunk- another relative, from the station Warroo, who fought in the last  charge of the Light Horse at Beersheeba. I  had the privilege  of meeting  Roy  some years ago. His biography make compelling reading, and of course Tibby  Cotter  who was there as well.

Finally,  I  remember my  uncle Ken Cotter who  served most of WW2 as a forward scout/surveyor for the artillery in the Australian army. His stories also were compelling.

I  still remember him when there were thunderstorms and he would retire and lie on his bed with  his arm over his face.  I  have his medals.

I  have a brother in law who  has done a number of tours in Afghanistan. On the other side of my  family  are Desert Rats from Tabrook as well.

Again why? That  area is such a stupid place, as is the   rest  of the middle east.

These were brave men. Naive perhaps by todays standards. But prepared to lay  down their lives for a friend.

Its a message that we all need to  remember.

"They  shall not grow old as we are who are left to grow old.

Age shall not weary them, nor the years condemn.

At the going down of the sun, and in th morning.

We shall remember them."


I  shall be mustering near Warroo and Caiwarro on Anzac day, and I  will remember my  brave uncles and cousins.