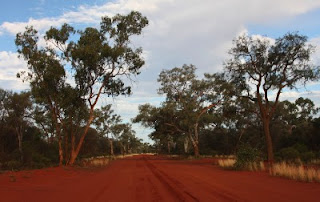 With the Easter break of four days it was time to set off for some serious birding and exploring of outback NSW.
This trip would take us to some familiar and not so familiar places. With storms, flash floods, and a vehicle that suddenly developed a major gearbox problem, it was both exciting and stressful.
We left on Friday and headed west to Cobar. The weather was not looking good, and there was a prediction of 2 inches of rain in a few hours, a place to camp was needed. We chose to head north to Gundabooka National Park. Located south of Bourke it was a bit of a detour but the road looked solid and the trip into the park not too difficult. After about 7 hours of travel we arrived. All the camp sites were taken so we had to make do with one we created. It was not too long that we had the troopcarrier set up and the fire going. A nice meal and some time near the camp fire was welcome. The moon was full, but before long some dark clouds began to form. It was time for bed. At about 3am a large storm to the south provided a symphony of lightening and thunder. A cool breeze blew through the screens of the troopies accommodation.

The choice we made was the right one.

The next morning a light shower made everything in the camp wet so we chose to pack in a hurry and do a 7km walk to a small range. Here we discovered red capped robin, and bull dog ants nests as well as beef wood trees. These trees when cut look like a slice of raw beef and were used by the aborigines for medicinal purposes. 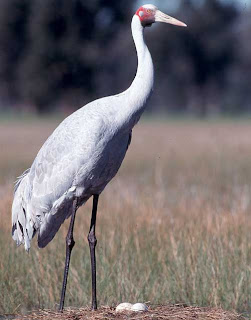 Walking in the bush is a unique experience, its harsh but its something more. After returning we drove to Louth- A horrible little place on the banks of the Darling river. The road was closed so we took an alternate route to Tilpa. The road was washed out in parts and 4x4 was needed in many spots. The road conditions varied greatly- from heavy corrugations to soft mud and dust at the same time, (Yep! that's right).   At Tilpa we enjoyed a pie and a beer as well as conversation with locals.

We then pushed onto Peery Lake. The road was rough.. The rear doors of the troopie require adjusting due to vibration, and beer cans and milk cartons wear holes through them which made a mess in the esky. Whilst traveling we enjoyed a good sighting of Brolga- A stunning bird and, dare I say more stunning than Flamingo, very tall and they  move beautifully. At Lake Peery we spotted a variety of ducks and water bird. It was difficult to identify as we required a telescope. 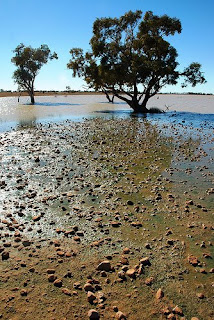 Peery Lake on the Paroo River.

After a while we pushed on to White Cliffs. This Opal mining town is like something out of a movie set, almost surreal, the owners live underground in dwelling carved out of their Opal mining lease. A quick fill up with fuel before we pushed onto Mutawintji National Park. Here there was a huge Aboriginal gathering and we enjoyed their high spirits and the hospitality of the Rangers. I was pleased when the rangers pulled up and got out, I thought "here goes.. I am in trouble".. only for a big grin to spread over his face and he said in a booming voice "top truck maaaatee!!!" ( this comment is here for you Maalie I know just how much you love the troopie!) 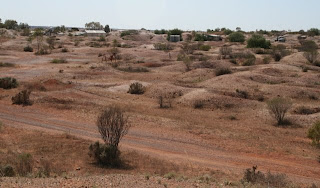 This national park has a spiritual significance for our Aboriginal people. The "clever man" ( or medicine man in other nations) healed the sick and did cave paintings, and it has been a gathering place before it was a sheep station. A walk into the gorges we could see why. Simply stunning. After several km, it was time to head back to camp.

Something strange came over me- I got a gut feeling that something was going to go wrong with the troopie... the roads are extreme and I decided to leave a day early. The drive out is through properties and frankly, the roads and tracks on the farms were in better condition than in the parks or main roads. 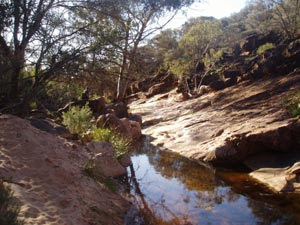 I was right- when fueling up in Cobar, I noticed oil pouring out of the transfer case. I had blown a seal. This resulted in me having to nurse the vehicle home- 14 hours in rain, non stop, at a reduced speed to ensure that I did not cook the gearbox resulted in me having to peel myself out of the vehicle. I must confess I was stressed as I waited for the gearbox to fail.

However, It was a top weekend. 2500km through some of the most amazing outback country, a beer with friends and wonderful campfires, and the sighting of Brolga and Australasian Bittern real highlights!

This weekends walk was into the Colo River Gorge. With recent heavy rain, we wanted to see just how the river was flowing.

The track to the car park is easy, although just after filming this first clip, the track was washed out in places. We both got the giggles, after filming.

The walking track wanders through tall gums, thick undergrowth and rain forest areas. I am sorry for the quality of the videos, I kept losing sound and nearly dropped the camera in the mud. It is difficult to drive, or walk whilst filming!!

After a few kilometres we arrive at the river. Its very beautiful, although with the water receding we did notice that the river mud was a bit smelly. We enjoyed some fruit bars, Vegemite, and nuts, before returning to the top.