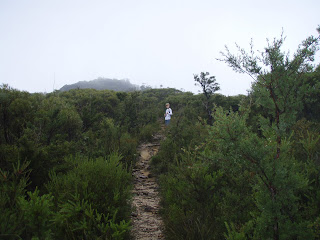 David at the start of the walk.

Perhaps one of the most spectacular and contrasting walks in the Blue Mountains is the walk to Lockley Pylon. Details are here http://ozultimate.com/bushwalking/walk.php?int_resource_id=723 It contrasts from other walks as it has an almost "alpine" feel. That is, the walk takes you across open heath and low vegetation. This walk is yet another way of decending into the beautiful Blue Gum forest, and meets at the junctions of Govetts Gorge and the Grose Valley.Approximatley 9 km it is an easy grade with plenty to see. We spotted Jacky Winter, New Holland Honey Eater and Yellow Thornbill all within a few minutes.

The weather was typical of the mountains. We started in heavy fog and drizzle, and once reaching our destination, were bathed in golden sunshine. Above us Wedge Tail Eagles soared, at our feet bull ants and bush cockroaches scurried. 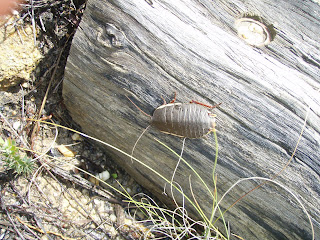 About half way we stopped for lunch and enjoyed the company of a Yellow Tailed cockatoo. These large birds are quite a site, with swooping flight and a distinctive call. 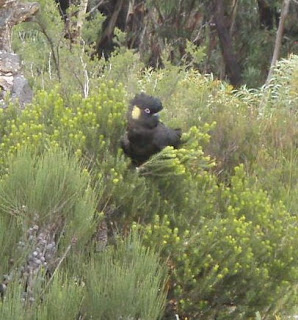 The views from the top are simply spectacular:- Mt Banks, Mt Hay, the Grose Gorge as well as Fortress Creek Falls create a vista not seen anywhere else. We returned to the car after a few hours it was a great way to spend an afternoon. 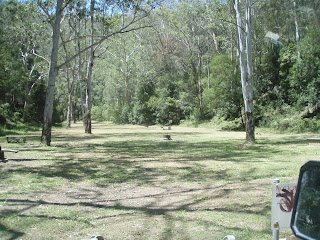 With temperatures soaring well into the high 40c+ range, and with David and his friend looking for something to do, I decided to take them to the Colo River to cool off, do some fishing as well as a spot of birding.
Fully equipped with fishing roads, buckets, lures, nets as well as binoculars, bird book and sunscreen we set off. The airconditioning in the troopie a welcome relief. We soon arrived at Wheeney creek  and after a few minutes spotted Yellow faced Honeyeater, Welcome Swallow, Bell Minor, King Parrot and Galah. Walking around the camp sites we soon spotted Lewins Honey Eater, Superb Fairy Wren and Soldier Bird. Davids friend Lochlan said "What's that bird there?" It was a Rock Warbler! I was pleased to be able to show the boys such a bird. 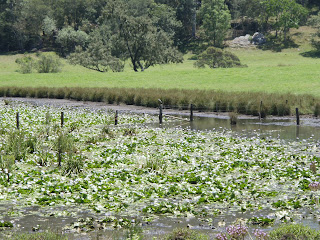 As the heat began to climb we moved on and we soon arrived at the swamps in Colo. Here we spotted Purple Swamp Hen, Masked Lapwing, Dusky Moorhen, and Pacific Black Duck. Again we moved on quickly and from the car Spotted Crested Pigeon, Willy Wagtail, Australian Magpie and a White Faced Heron.
Not too much further we had arrived at the Colo River bridge. Needless to say it was a little busy as many locals tried to cool off. We decided to push onto the camp grounds. It's a very pleasant location, with easy car camping available and although busy, it was not as crowded as the bridge. The boys gathered their gear and after a few minutes had arrived to where they wanted to fish. 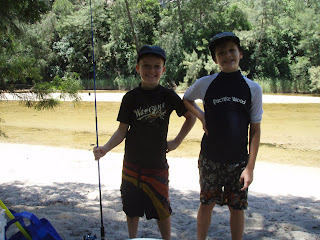 David and his friend.

The Colo river is a shallow fast flowing river at this point with white sandy beaches and rugged steep sandstone cliffs. It is one of the most beautiful places I know and formss part of the Wollemi National Park.
I chose to sit under a tree and read my bird book,(damn cast on my  arm!) whilst the boys fished. I doubted they would catch anything.. After a few hours they returned with flat head fingerling's, prawns and numerous other small fish we could not identify. A small crowd gathered to have a look and the boys had made numerous friends as they concentrated their efforts on the reeds and shallows. 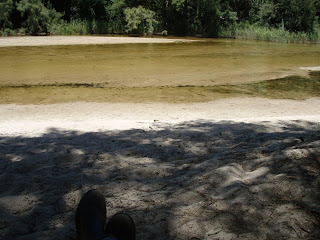 Kicking back in the shade.

One fish of note is the Puffer fish. Like its cousin the stone fish of the ocean this fish has poisonous barbs so wearing sand shoes is essential or a trip to hospital could be in order.
As the sun began to shift it was time to leave. An enjoyable day was had by all. David placed his fish in his aquarium where the majority have survived and are enjoying their new surrounds. 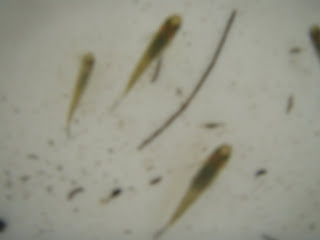 Well after a few months the D7G was sold to a dealer in Queensland. Here it is being loaded onto the low loader. Quite a skill in itself. The blade was removed, so as not to exceed the maximum width for our roads.

Jeep update:- Having purchased four new wheel cylinders and a new master cylinder, as well as new plugs, points, distributor cap, upper and lower radiator hoses and condenser, the jeep is now ready to be transported to the mechanic to have a tune up and have the brakes bled. As you know I cannot do this because of my arm. 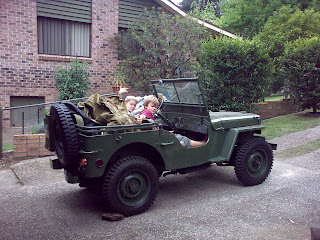 So, within a week, the vehicle will be ready for rego and then able to drive! Oh, and I bought a gun mount with fits on the windscreen just above the dashboard. How cool is that?