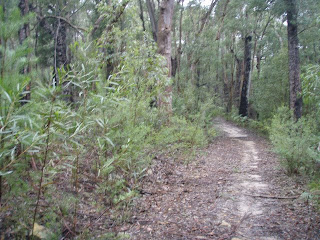 Fast section of track during the day.

Since January I have not ridden nearly as far as I would like. This is due simply to sore knees. These have been a problem for a while and so I went to see a specialist about them. The upshot is- I have very little cartilage left and the knees are bone on bone.. Now for some this might come as bad news, but I was delighted to see that the wear on the bones is nice and even. This is because of the years on the bike. The doctor wants me to continue riding as it will ensure that I will not need a replacement knee for a few years! 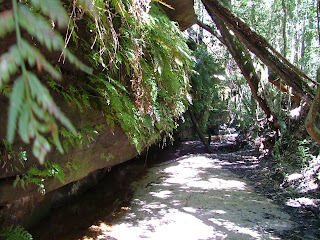 Sandy sections to be tackled at night

So, with boyish enthusiasm, I chose three very different rides this week. The first being a ride into Wheeny Creek. This 30k night ride is a mix of tar and dirt roads, with a steep decent and return out of the camping grounds. I chose the mountain bike as it is most suitable. I would be riding with fast peak hour traffic and would need the suspension to cope with the occasional escape from idiot drivers, before riding the quiet dirt section into the National Park.

Wheeny creek is beautiful and peaceful. Birds such as rock warblers, lyre birds, pacific duck as well as bell minors and superb wrens can be found here. Upon my return I met some endurance horse riders who were surprised that I could catch up and ride past them. The only difficulty on this ride is the speed down hill can sometimes "overtake" the headlights beam, making for last minute choices re potholes difficult. I was grateful for the larger tyres and suspension on more than one occasion 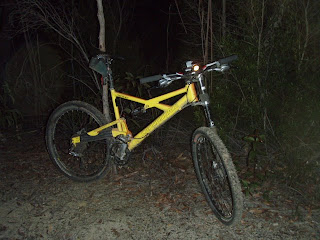 The Cannondale Prophet at night

The second ride was more technical and again at night, on some of the rougher fire trails in the Blue Mountains National Park. Whilst only a short distance (10K) it is a mix of rock ledges, deep sand, and wash outs. In the evening the "line" chosen to tackle these is far different to the line I would choose in daylight, and sometimes mistakes are made. Spinning faster in the lower gears makes out for a different workout too. In fact with a lot of climbing and balancing the entire body gets a workout.

Night time in the Australian bush without the moon is eerie. The thump of wallaby as well as the screech of the occasional owl makes it so. Sometimes an icy wind would blow and the gum trees would sound like the ocean. You can hear the wind coming from quite a distance away, and it was cold. Sadly the battery on my light failed prematurely, and I had to ride back with the "brown light". This creates a new problem. Without enough light to highlight the edges of the track it was very easy to get off course! Still, a lot of fun and I only just got home before the battery was completely flat! 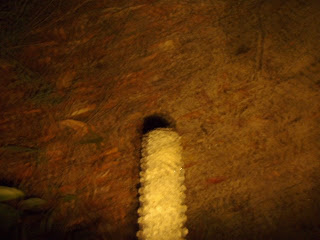 Brown out! Only a small pool of light in front of the tyre

The final ride of the week was my usual 50km along Comleroy road. A great training ride on the road bike, again a different workout to the mountain bike. Much bigger gears, no suspension mean the power to the wheels is instant and creates a real concentrated workout on the legs, heart and lungs. This ride was pleasant and uneventful. Returning to Kurrajong via Putty road. Where I live the area and its surrounds are beautiful. The smell of fresh cut grass, horses and cattle as well as Wattle trees in bloom makes it heady!! 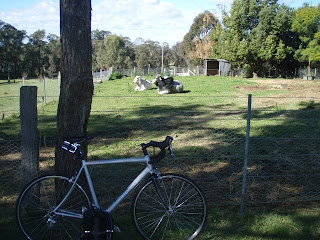 Saying "G'day" to the locals!

The knees? Well they are still there! I hope to be able to ride 4 times a week and get back to the distances I was doing last year... we shall see! BTW to my English friends- I am off the beer and ales...... 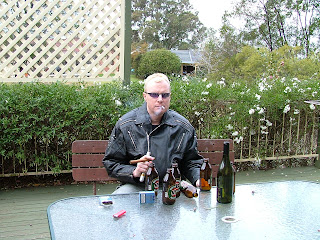 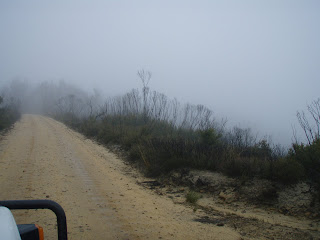 The plan was- To go to Coolah Tops National Park. The reality was- It was too wet, too hit and miss, so instead I chose to walk down to the Victoria Falls.

Situated west of Blackheath, but in the same network of valleys as Blue Gum Forest, I was curious to see just how the landscape had recovered from the bush fires. Like Perry's Lookdown, it requires a drop into the systems of creeks and gullies that ultimately form the Grose Valley, and Grose River. I had hoped to improve on the bird list as well. But with heavy fog and rain, it was unlikely. 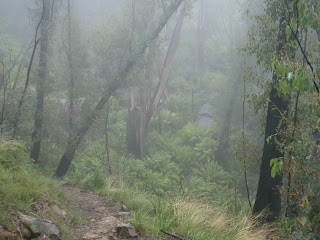 Early section of the track.

The drive to Mt Victoria is uneventful and pleasant. Once arriving the road to the falls is easily signposted and the average sedan would cover the 12k of dirt road with ease.
I was surprised to see quite a few other dedicated walkers and campers in the area. It was good to see other enjoying the mountains despite the weather. Parking the troopie, its a decent into the valley. Not as extreme as Perry's it is a pleasant mix of steps, rock overhangs and forests. The fire here must have been intense as much of the undergrowth has vanished, replaced by succulent new growth. In opening the canopy too, new growth is rapid, as native species compete with weeds that seemed abundant. 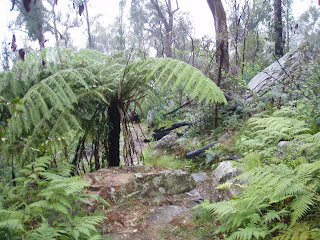 The rain and wind were reasonable and most birds seemed absent. Not that it mattered, my binoculars fogged up and my books got soggy in the process.So I pushed on. Within a short time I was at the falls. 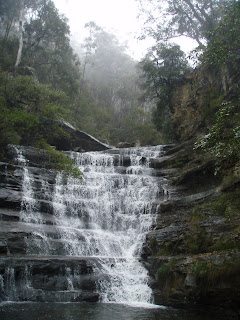 Victoria Falls
They looked great! Rock pools were full and the sound of falling water and Bell Minors filled the forest floor. In the pools were HUGE Yabbies! For my OS friends these are similar to a lobster or many other crayfish, and are delicious eating for sure! Some are pale blue in colour, yet these were a brilliant red. Simply boil water with salt and drop them in head first. Sadly these ones are protected in the national park, so I had to content myself with a stale biscuit!. 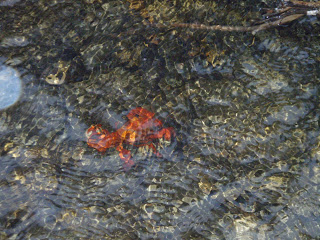 Yabbies with white wine and a cheese and garlic sauce........
After taking several photos I headed pack towards the car where a hot cup of coffee was most welcome. It was a most enjoyable walk. 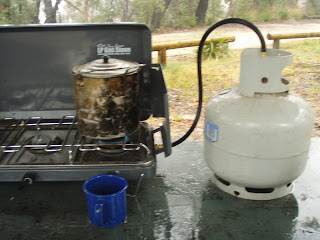 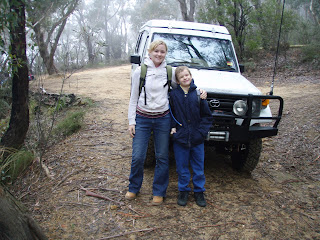 Rosalie and David with Troopie before the decent.
One of the most memorable and beautiful places, for me, is Blue Gum Forest. Situated in the Grose Valley, it is a place of tall blue gums, tree ferns and rivers. It was the place of my first over night bush walk, It was the place of stories and history. It has been compared to the red wood forests of the USA.

In the 1800's, the Grose Valley was to be utilized for the main rail link from Sydney to Bathurst. Several attempts were made to build, but each time floods washed the works away. If you walk from Blue Gum forest down the Grose River you might just see some of the works. It was also considered to be dammed as a water supply for the Sydney region. 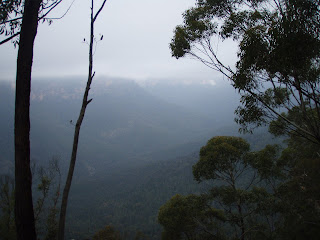 The view into the valley.
By the 1870's Sydney walking clubs had discovered its beauty and were doing their best to save this magical place. By the 20th century two men, Perry and Hungerford, had leased the area They drove cattle into the valley and had plans to cut all the timber down. In 1931 the bush walkers club offered 130 pounds for the lease. Hungerford agreed. The Valley was saved. ( please note- this is the abridged version- more accurate history can be found on-line). Some of Australia's earliest art works and photography can be found with this area as its subject. It's simply that beautiful and significant. 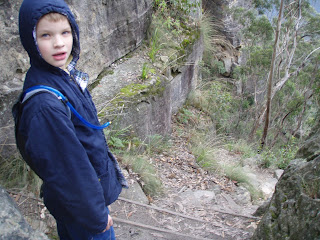 David equipped with camel back on a steep decent.

In the 1970's cattle still roamed- keeping the forest free from weeds and growth. Back then you could light a fire for your meal. Not so today. Fuel stoves are a requirement and the undergrowth is thicker, and laced with weeds. However, its still beautiful. I have fond memories of a enamel cup of hot billy tea down at Acacia Flats as well as telling stories by the fire.

I chose today because the weather forecast was not good- fog and rain and cold. So I had no chance to mow lawns and do chores. It was not long before my eldest daughter and youngest son asked if they could come. 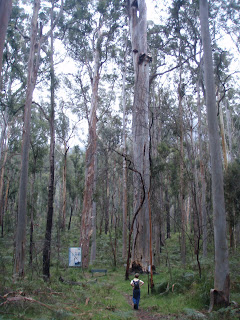 David approaching "Big Ben"
When we arrived I was relieved and excited. Bush fires two years ago had devastated the area. There was still plenty of evidence with some big trees destroyed. Big Ben was still there and bigger than life. Looking more like a tree that should be in a Tolkien novel!

After half an hour we decided to return. The climb out is constant. David, (who always takes the lead), suddenly asked us to be still and quiet. To the left of the track was a Lyre bird mound and the Lyrebird himself was doing a full display, utterly oblivious to our intrusion. It's a moment of chance that I will never forget. 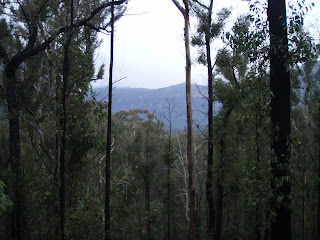 Some of the views

The climb out reveled Tree creepers, Whip birds and Bell minors. It was extraordinary. Within the hour and a half we had made it back to the top.
Nearby is a monument to some children who died in the 1950's. Fire rushed through and they tried to beat it back to the top. Bush Fires RACE uphill but move very slowly downhill. It was utterly tragic. They were only 14 years old. 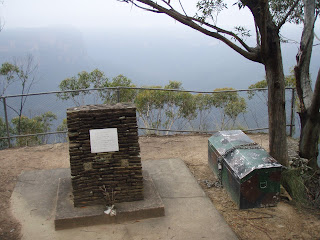 Returning to the troopie was a relief. Heavier fog had set in and we were comforted by the troppies capacity to get us home safely.

I would like to say this- I want to thank my eldest daughter Rosalie for being so positive, even though some parts of the walk were quite difficult. I would also like to thank David, who even at just 10, is a born leader. FULL of encouraging words and observations about the bush around him. He is a delight to walk with , and when the going gets tough his focus and determination is extraordinary. 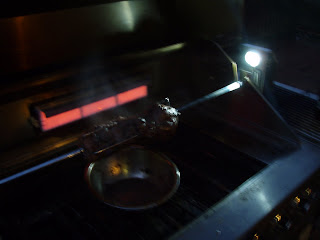 The BBQ has headlights!!
On returning home a nice BBQ Tuna steak, and a James Squire Ale, finished off a magical day.
Posted by simon at 1:07 AM 16 comments: