Hi Everyone! I have been silent for a few weeks because I have had the flu, and yet still working six days a week. So I have had little time or energy for anything much!

However, I have a new web-site. Go to www.simoncotter.com.au and tell me what you think! 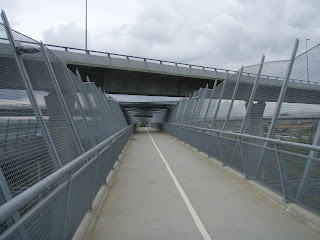 With the troopcarrier at work and with no prospect of any help to get it home, I decided that I had to ride to Liverpool from the Blue Mountains. A trip of about 80km. Having got over the small "pity party" I had yesterday, I thought such a ride would do me good. I was right!! The ride was positive and uneventful, with the first 15km largely down hill. Coming off the mountains at 650 metres and dropping rapidly to the Hawkesbury River at 50 meters the trip begins quickly!.


However, its a steady climb out of the valley for much of the trip. Passing Richmond and Windsor there is a bike track which leads to the "new" M7 motorway. This Motor way has one of the best cycle paths around. Fenced, lit, and safe. Why is that critical? Because most Australian car drivers treat bike riders with contempt. True! You are run off the road, food and cans thrown and recently a driver smashed into 50 riders on an Olympic training ride- Frankly, its disgusting.

So its with much relief that I entered the bike track. The M7 is clever! Lots of waterways for birds, Interesting scenery, and A cycle path that incorporates hills, and zig zag. It keeps you on your toes!

One of the interesting structures is the Light Horse Interchange. For those who do not know- IN World war one. Australian mounted Infantry charged the Wells at Bathsheba. This was in direct disobedience of the English officers. These men were not Cavalry, but mounted infantry whose job was to ride to a battle , dismount and fight. However, in this case they were without water. The Australian Whaler ( the tough Aussie Horse), was their mount. It was critical that they capture this town or they would die. 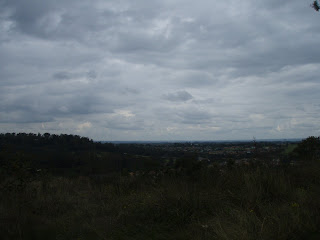 View from the track.

The Australians charged the wells. The Turks expected them to dismount, but the Australians did not. They raced across the ground, ( I get goose bumps thinking about it!) and the Turks could not adjust the guns. Horses whipped up by the smell of water charged over the towns walls, many dying and still running on. It was an awful battle. but victory was for the Australians. This structure that I ride over was to remember the heroism of this event. I felt strange.

Further on, the track snakes its way over and under the motor way, before I exit and do battle with traffic on the domestic roads. The last 10 km are difficult, requiring sprints from traffic lights, high speed and being alert to what comes behind. However I arrive in one piece and collect the troopcarrier.

The work done this week was to fit an air compressor which is used to pressurize the water tank, fill tyres and engage the diff locks. 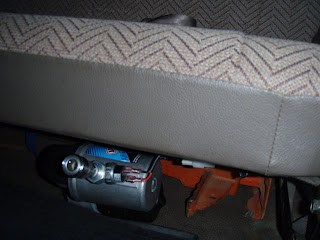 The air compressor. Isn't it beautiful??

Its a handy item to have and perfectly positioned under the rear seat.

The trip home was quiet and I felt good having spent the morning on the bike. I have to say there were birds a plenty. Yellow Tailed Cockatoo, Soldier Bird, Bell Minor, Indian Miner, Nankeen Kestrel, Mallard, Swamp hen to list a few. I enjoyed the birds as I rode and drove.
Posted by simon at 1:49 AM 12 comments: